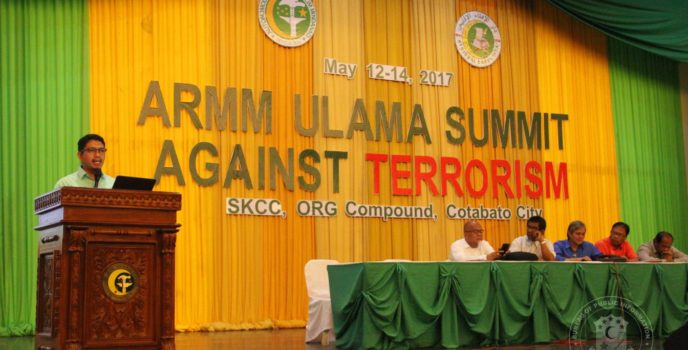 Secretary Abdullah said that the 116 municipalities and two cities in the region will soon conduct a summit against terrorism and illegal drugs to prevent and combat the rising threat of terrorism as well as to strengthen the role of the LGUs in promoting peace and security.

The summit would synchronize measures on how to restrain criminality, terrorism and illegal drugs, which affect the peace and order situation in the region. The LGUs, Secretary Abdullah said, must be at the forefront of this battle and must have a major role in combating terrorism.

“The summit will help confront terrorism and extremism at the municipal level,” Sec. Abdullah said.

The decision to bring down the issue at LGU level came after the Dawla Islamiya, which has pledged allegiance to the Islamic State, issued a statement threatening the ulamas who attended a three-day summit against terrorism in Cotabato City last weekend.

“To those who have Ulama relatives, warn your parents, brothers, and children not to attend the said summit because if something happens to them along the way or in the end, don’t tell us you were not warned,” the Dawla Islamiya statement said.

The three-day ‘Ulama Summit Against Terrorism’ is an initial step of the ARMM government to enlist the support of Islamic scholars to combat terrorism.

ARMM Governor Mujiv Hataman said Muslim scholars can contribute to the advocacy against terrorism by educating people about the true teachings of Islam most especially on the principles of justice, compassion, peace, and harmony. The national government considers terrorism as an urgent and critical national security threat.

“The LGUs play a vital role in the fight against terrorism and illegal drugs because local chief executives and officials could help prevent violence in their respective areas,” Sec. Abdullah said. He reiterated that close coordination, mutual support, and cooperation at all times can help put an end to terrorism.

“I can see that the LGUs in the region are very active in this fight in order to have peaceful and progressive communities,” he said. “Liliit ang mundo ng mga teroristang grupo kapag nakita nila na lahat nagtutulungan to fight terror acts,” he added. (Bureau of Public Information)