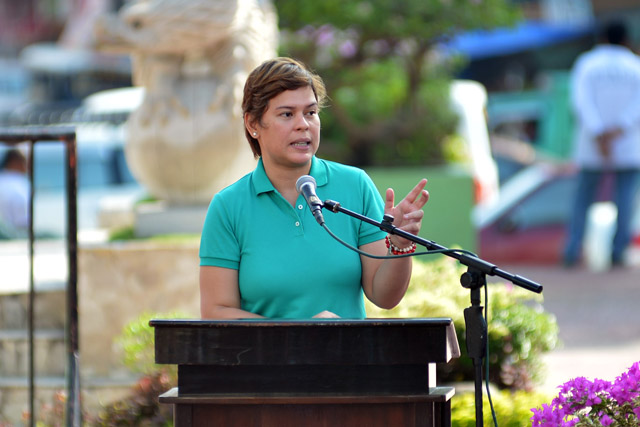 DAVAO CITY, Philippines — The city is locked, authorities adopt stricter measure to secure the people as Martial Law was declared in the entire Mindanao Island.

In a dawn press conference, City Mayor Sara Duterte-Carpio advised Dabawenyos to stay inside their houses if they do not have very important things to do outside their residences.

Duterte-Carpio issued the statement as she met law enforcement agency officials at the Public Security and Safety Command Center.

She added “Those outside Davao, who have no important things here, not to travel to avoid hassles. We discuss possible scenario here, If you do not have important things to do outside your residences, you just stay home.”

Asked about the threat in the city, Duterte-Carpio emphasized “we have personalities identified, some are detained here, we have been requesting for them to be transferred to Manila” because there are some personalities detained in Davao detention facilities.

Travelers and tourists are advised “use prudence in planning their activities here as checkpoints are installed, if not important don’t travel to Davao or Mindanao because Martial law covers the entire area of Mindanao.”

She added, “In fact, don’t travel anywhere at all, because Martial Law covers the entire area of Mindanao, especially so here in Davao. Security will be stricter here because this is the hometown of our President,” she said.

Duterte-Carpio added that the police and military “will be quite aggressive in implementing their security measures.”
Stiffer security here in Davao “because this is the hometown of the President” Duterte-Carpio emphasized.

The chief executive emphasized they have yet to receive a copy of the Presidential Proclamation.

Once they receive a copy of the Presidential Proclamation declaring Mindanao under a state of Martial Law and “[the suspension of the] privilege of Habeas Corpus, they can pick up people whom they suspect are sympathizers of Maute Group, of Abu Sayyaf, and Isis, and all other identified terrorist groups,” she emphasized.

The mayor said a curfew will be enforced, but declined to reveal details pending the release of official guidelines.

However, she said the imposition of curfew hours is to be expected during Martial Law.

Duterte is on his way home now, cutting short his Russia visit, to attend to the pressing security concern of the country particularly in Marawi City. -Editha Z. Caduaya/Newsline.ph