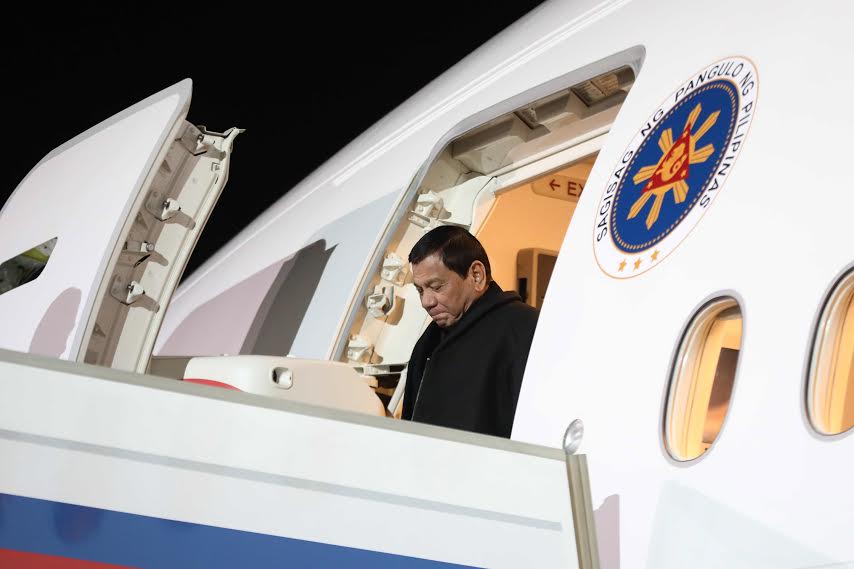 The President will leave Moscow, Russia at 3a.m this morning, Wednesday May 23 (Manila time). Duterte was in Russia for a five-day state visit but he cut is short due to security concerns back home.

Abella said Martial law is declared in the entire island of Mindanao for 60 days. The president met his security advisers before he made the declaration.

“In order to suppress lawless violence and rebellion and for public safety, it is necessary to declare Martial Law in the entire island of Mindanao, including Sulu, Jolo and Tawi-Tawi for a period of 60 days,” Abella emphasized.

He added “The government is in full control of the situation and is fully aware that the Maute/Isis and similar groups have the capability, though limited, to disturb the peace; these have shown no hesitation in causing havoc, taking innocent lives and destroying property.”

This after government forces and the Maute group clashed in Marawi, Lanao del Sur Tuesday afternoon.

National Security Adviser Delfin Lorenzana said the President was briefed on the situation in Marawi “and at this point in time, our forces can handle the situation, there is no need to ask help from foreign countries.”

Lorenzana said the government troops went to the area to serve the warrant of Arrest for Isnilon Hapilon “but he was backed up with fighters” and engaged in a firefight.

Security officials believe Hapilon and a handful of his men left Basilan for Lanao del Sur to get in touch with the Maute Group as part of an effort to establish a caliphate of the Islamic State of Iraq and Syria (ISIS).

Both groups, as well as the Bangsamoro Islamic Freedom Fighters (BIFF), have pledged allegiance to ISIS
Cayetano said the President does not take the situation lightly “he has been briefed about the situation in Marawi and the threats in Mindanao and other parts of the country.”

In cutting short his Russia Visit, Cayetano explained “The physical presence of the President is needed in the Philippines, his priorities is the protection of the Filipino people, the president will act within the framework of the Constitution in the implementation of Martial Law.”

The President, according to Cayetano “knows that implication of Martial Law declaration especially to the tourism industry of the country but his priority is the safety and lives of the people.”

Cayetano explained “we cannot give details because groups in Mindanao monitor what we say here, we cannot reveal out plans and the tactics we will implement but we will keep the people informed of the situation.”

As of late last night, “No civilians is allowed to roam around and resident were instructed to stay inside their houses,” Lorenza elaborated, as several houses were burned.

Military sources say five soldiers were hurt during the afternoon firefight when armed members of the Maute group took over a government hospital there.

Nitizens in Marawi on facebook claim the City Jail of Marawi and and Landbank buildings were burned.-Editha Z. Caduaya/Newsline.ph