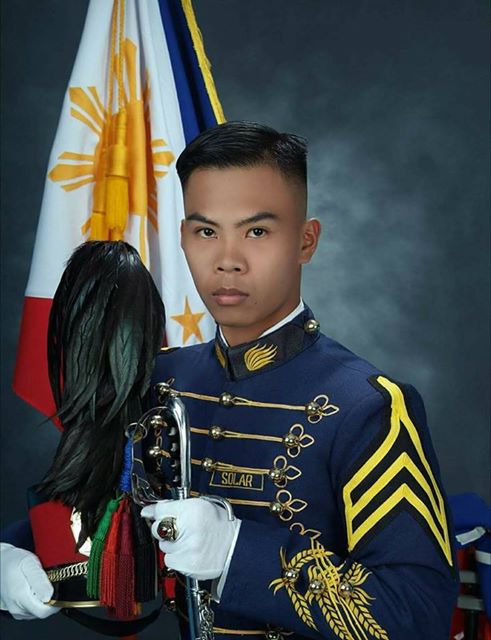 At the height of the fight last night, a family in Baguio City lost a husband and a father–Police Senior Inspector Fredie Solar!

Susan Solar-Urbano in her facebook page posted his bother’s graduation speech saying “I will be successful! Someday, I will be called by my alma mater to render a graduation speech” but his dream to go back to the academy to be a speaker died as he was killed by members of ISIS-backed Maute terror group in Marawi.

Urbano further stated quoted his brother saying “I will inspire all the graduates! This was what he told me before he entered Philippine National Police Academy (PNPA) in Cavite.”

A police officer here, who is Solar’s classmate at the PNPA said “he is a very silent guy, filled with dreams but his dreams are gone now, we are saddened.”

Solar dreamed of becoming a successful government servant and to uplift his family from the hard life his family experienced.

Urbano shared the hardships that their family has to go through “While growing up, life was hard. Our father can hardly make ends meet. Oftentimes, we go to our neighbors and ask for sayote tops or camote tops just to have something to eat. We begged at the store to lend us rice just so we can cook something.”

Urbano shared the pain of losing a brother in her facebook page:
“Life was really hard but this did not stop my brother to pursue his calling and achieve his dreams.

He experienced hardship and this became his bread and butter to achieve his goals in life. Through hard work and determination, he was able to graduate in PNPA Sansinirangan class of 2007.

Our father never had the chance to see him graduate but we know that he is proud of him. After graduation, he was assigned in Mindanao.

For numerous times, we have pleaded for him to come back in Baguio.

We have asked him to apply for re-assignment at any other place in the Philippines except Mindanao.

At first, it was just patriotism that drove him to be in there. And as days and years passed, he still ignored our request to work for his re-assignment but he always assured us that it is safe there.
He said, the people there respects him and this was enough for him to stay. He has come to love the people of Marawi.

But just last night, at the Marawi siege, in the hands of heartless terrorists, we LOST him. He died defending the people that he has come to protect.

We lost a humble, kind-hearted, determined brother who we dearly love, all for the sake of the country.
This is really heartbreaking for all of us. My tears just keeps on flowing and it just wouldn’t stop since last night.

I just can’t describe the pain I’m feeling right now. He dedicated his life for our country.
He left behind his loving wife and 2 very young children. I am filled with deep sadness which I have never known existed before.

Is his life worth it? Why did this happen? How will his family be without him? Why him? Why Lord?

We have a lot of questions but we cannot find the answer. We can only lift everything to God.

The message ended, with Solar’s sister saying “You fought well. You may now rest in peace Police Senior Inspector Fredie Solar! We love you always!”

Solar’s classmates are still in a state of shock, demoralized but determined to get justice to the death of their classmate. -Editha Z. Caduaya/Newsline.ph