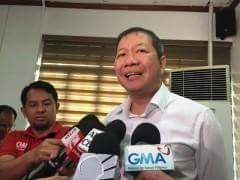 Manila, Philippines–Fresh from Russia, President Rodrigo Duterte fired the chairman of the Dangerous Drugs Board  (DDB) for allegedly issuing  contradicting figures about the illegal drugs data.

Addressing himself to DDB director Benjamin Reyes, Duterte said “You’re fired today. Get out of the service,” Duterte said. “You do not contradict your own government…You’re just a civilian member of a board,” says Duterte  as he was giving his arrival statement from Russia.

Duterte  emphasized “And I would like to put to task publicly this  Reyes. You know five years ago, Santiago who was the PDEA chief gave us a figure of three million.”

President stressed  “Ang binigay ni Reyes sa chairman ng  Dangerous Board, ‘yung accomplishment ni Bato ng PNP. That’s 1.8. And dala-dala ng babae was 1.8. When I have been telling everybody, everything that there’s about four million drug addict(s),”  he added.

The Dangerous Drugs Board has been using a 2015 survey that says there were 1.8 million drug users in the country.

Duterte said Reyes is not an “implementor of the law.”

“The correct count is the police and the PDEA (Philippine Drug Enforcement Agency),” Duterte said.

Last Tuesday, the ANC channel interviews Reyes,  he  used the statistics of 1.8 million drug users but he also reportedly said that they have information that the number can go up to 3 million or 4 million.

During the presidential campaign Duterte has been using the 3-million figure provided to him by Santiago but Reyes continue to use the old statistics. -Harole V. Pontongan.-  /Newsline.ph