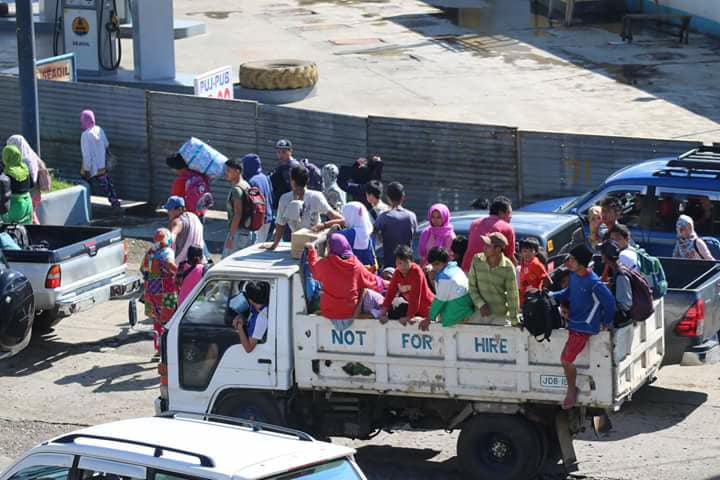 DAVAO CITY, Philippines (UPDATED)– Twenty six of the 96 barangays in Marawi City are affected by the sporadic fire fight between the government law enforcers and the ISIS-backed Maute terror group.

As of May 29 the DSWD ARMM reported “Based on the report of the SWADL in different municipalities, there are 12,509 families affected by the clash, of which 1,081 families or 4,278 persons housed in evacuation centers while 10,974 families of 54, 870 individuals are home-based.

The PSWDO ARMM, explained the reason behind the fewer turnouts of IDPs (internally Displaced Persons) inside the evacuation centers is because of Maranao culture sensitivity.

The Maranaos value the culture of helping and close-family ties especially during in crisis situation. Further validation of the home-based evacuees is being conducted. It is predominantly a Muslim city (99.6%) where Sharia criminal law exists.

The economy is largely based on agriculture, trading and exporting. Most industries in the city are agriculture-oriented, rice and corn farming.

Many of the affected families fled for safety and found temporarily shelter in their families and friends in the nearby cities of Iligan, Cagayan and in nearby Municipalities of Lanao del Sur.

Several residents evacuated to nearby villages in Iligan and Marawi City, and to municipalities of Saguiaran and Baloi.

Taguiwalo’s report revealed The DSWD identified 11 open evacuation centers which is under closely monitored by the DSWD ARMM, as Marawi City is part of the Autonomous Region of Muslim Mindanao (ARMM) and has its own DSWD ARMM.

Through its Humanitarian Emergency Action and Response Team (ARMM- HEART), it acts both as first responder and augmentation to the area.

DSWD ARMM as a separate office from DSWD National, it has its own budget. But the central office helps whenever the need arises especially during calamities, whether it be natural or man-made.

There are home-based evacuees while others stay in the evacuation, both will continue to receive family food packs, Taguiwala added.

The DSWD will also provide assistance to evacuees staying in relative’s houses after undergoing validation as well. The agency issued DAFAC is an identification card used to ensure smoothness in the distribution of goods and services to the IDPs.-Editha Z. Caduaya/newsline.ph