Posted on June 12, 2017 by NewsLine Philippines 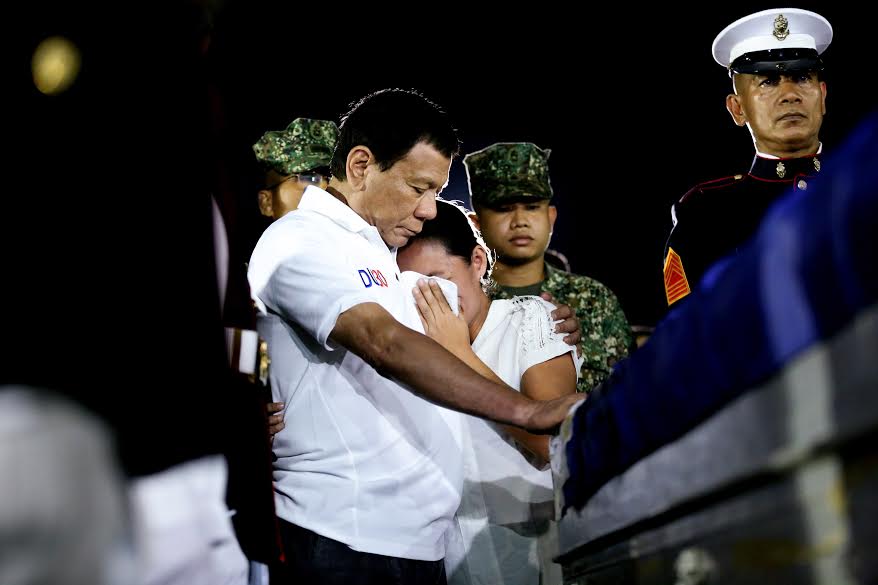 MANILA, Philippines— President Rodrigo Duterte on Sunday led the arrival honors at the Villamor Air Base for the eight soldiers killed in hours-long gun battle between government forces and Maute militants in Marawi last Friday.

President Duterte arrived at the Air Base grandstand around 7:50 p.m. where he personally condoled with the families of the slain soldiers.

The bodies of the slain Marines were flown to Manila from Laguindingan Airport in Cagayan de Oro City on Sunday afternoon.

Upon the arrival of the President, the metal caskets covered with the Philippine flag, were carried by soldiers out of the C-130 plane and were placed on high-lift ramps in front of the grandstand.

The slain soldiers were accorded arrival honors. The President then approached each family member to express his sympathies and condolences.

The President extended financial assistance to the families of the fallen soldiers.

He then proceeded to the Marines headquarters in Fort Bonifacio to visit the wake of another two soldiers who were also killed in action in Marawi.

The two were Corporal Romula Garcia and Private First Class Eddie Cardona Jr. whose remains lie in state at the Acero Hall inside the Philippine Marine Headquaters.

The President’s last stop was at the Libingan ng mga Bayani where he paid his last respects to Corporal Reymond Paracuelles, who was killed on June 9 during a firefight with members of Maute group.– (PND/PNA)