Denuded Marilog soon to be regreened 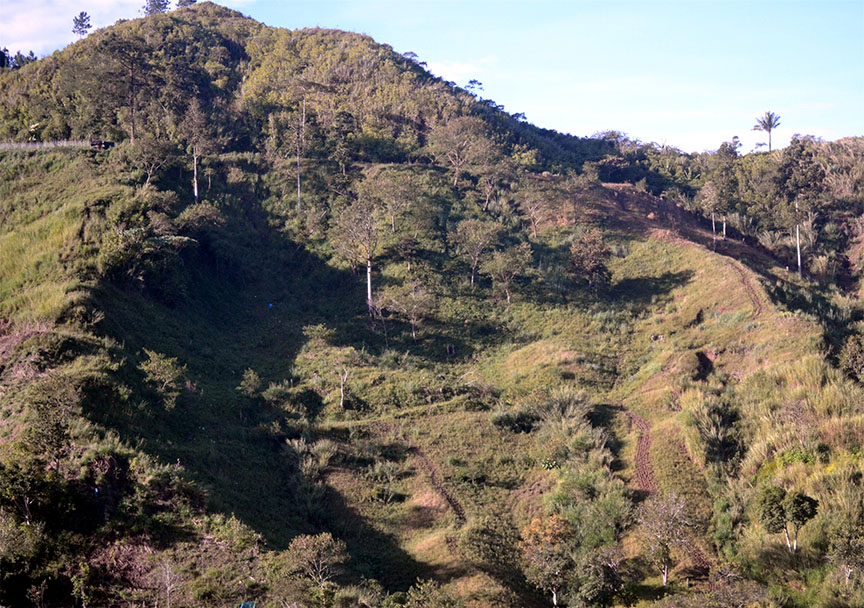 One million within 10 years! That’s the aim of the Therma South, Inc. (TSI) to accomplish its mission to reforest the denuded areas of Marilog district, some 50 kilometers away from the heart of Davao City.

In the past, Marilog district teemed with forest and diversified flora and fauna. In the 1970s, logging – both legal and illegal – became the norm in the area. As a result, the mountains were devoid of their forest cover and wildlife plants and animals were nowhere to be found. Some of them are facing extinction, including the Philippine eagle.

The TSI, a subsidiary of the Aboitiz Power Corporation, has chosen Marilog because most of the mountains are now barren. Besides, it is home indigenous people’s group, particularly the Matigsalug. The ancestral land of this tribe spans about 40,000 hectares.

The reforestation program initiated by TSI in the district is part of its corporate responsibility. When the Davao City Council approve the 300-megawatt baseload power plant located along the boundary of Davao City and Santa Cruz in Davao del Sur, one of the requirements was to come up with a carbon sink program that would mitigate the carbon emissions of the coal power plant.

This paved way to the Carbon Sink Management Program (CSMP). A “carbon sink” can be likened to that of a garbage bin that serves as a receptacle for carbon dioxide. Among the greenhouse gases that trap the heat near the earth’s surface, carbon dioxide is the primary culprit.

Carbon sequestration describes long-term storage of carbon dioxide or other forms of carbon to either mitigate or defer climate change. Carbon dioxide, in the form of gas, can be sequestered out of the atmosphere through photosynthesis. The carbon dioxide is converted into sugar by the plant or emitted back to the air through perspiration.

Carbon stored in plant parts other than the stem wood or trunk are generally decomposable biomass which eventually becomes a part of the soil organic matter of which the more stable component is the 50% soil organic carbon.

The TSI believes that through planting trees, the carbon dioxide footprint of human activity can be “captured” with the trees as the “sink” for the carbon. Among the forestry trees planted, which are seen to effectively sequester carbon emissions, are falcata, mahogany, mangium, narra and yemane.

“These are grown along with other fruit-bearing and indigenous trees,” says Perpetuo Maningas, TSI forester.

The CSMP is concentrating its efforts in reforesting the Marilog district, as it has meet all the necessary requirements for the project: vast land for reforestation, relatively accessible, within the area where the coal plant is located, and organized community.

“We train, give financial support and assist the livelihood activities of the Matigsalug,” Maningas said. “Through cooperation, we can achieve together the objective of restoring the forest cover of denuded ancestral land.”

Only about 50 households living in the uplands are members of the MAMATRIPCEDI. Last year, the group planted 25,000 seedlings to 25 hectares. For this year, they are planning to plant 82,500 seedlings in 75 hectares.

Aside from reforestation, the CSMP also introduced the century-old agroforestry, where agricultural crops and trees are planted together in the same area. This is the livelihood component of the program.

Beneficiaries are advised to plant agricultural crops like vegetables which are suited in the area and have ready market in the city. In addition, the project also recommends planting permanent crops like fruit trees and beverage crops, the latter of which include coffee and cacao.

Coffee is known as one of the crops that can be sold immediately; coffee houses are sprouting one after another in Davao City as drinking coffee is now a popular thing to do. Cacao, on the other hand, is also becoming well-known as Davao City is being groomed as the chocolate capital of the country.

In addition, TSI provides financial assistance – a start-up grant of P10,000 – so that the beneficiaries can plant and nurture the agroforest trees by themselves. “The by-product of the tilled land (from fruits to vegetables) will go to the beneficiaries and their families,” a TSI briefer said.

“The overall goal of the project is to establish a cost-effective, long lasting and significant strategy for carbon sequestration as mitigation to the emissions of the power plant,” Socorro Patindol, of the Aboitiz Power Coal Group, explained. “In addition, it is a way of promoting and achieving sustainability in forest protection and conservation in the community.”

In the meantime, the program has already helped arrest soil erosion in the area. According to the Mines and Geosciences Bureau of the Department of Environment and Natural Resources, the soil in Marilog district is classified as sandy to sandy loam which is prone to landslides. Since the area has been steadily reforested through the CSMP, the problem of soil erosion and landslides are slowly being addressed.

In order to continue supporting the partner beneficiaries, TSI has also conducted various livelihood programs. This year, TSI and Aboitiz Foundation, Inc. have partnered up with the regional office of the Department of Trade and Industry and the Davao Designers Pool for a crafts livelihood program aimed to capacitate Matigsalug women and youth to improve the quality of their indigenous crafts and find a market for them.

The TSI briefer said that the 1 million trees to be planted can only absorbed 15% of the total carbon emitted by TSI’s power plant. One wonders: What about the remaining percentage?

“The rest of the 85% carbon emissions are left for the end users – the actual electricity consumers – to manage,” the TSI briefer explained. “This will involve education and management of carbon footprint.”