Posted on June 14, 2017 by NewsLine Philippines 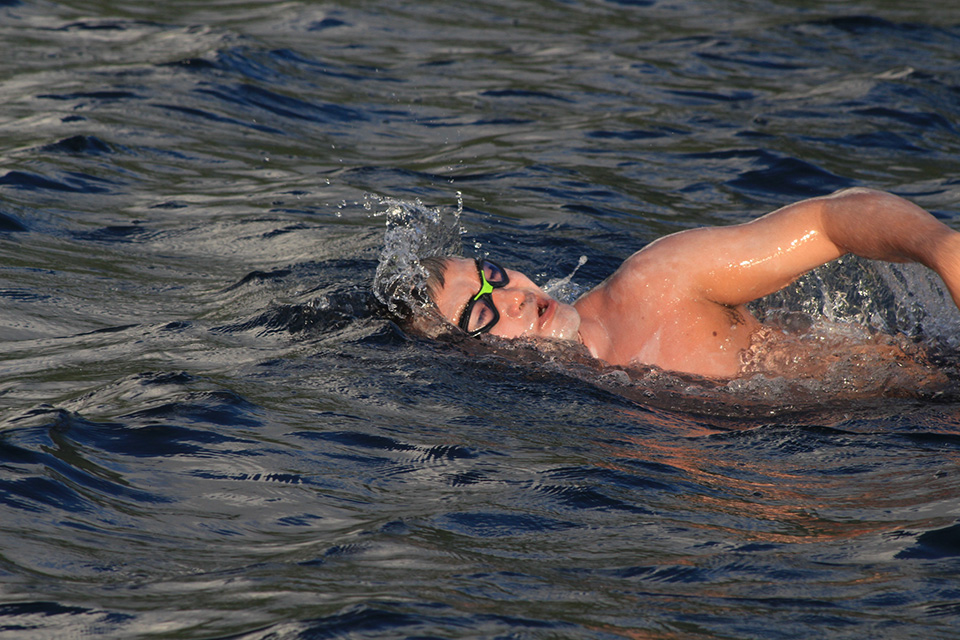 That was what environmental lawyer and triathlete Ingemar Macarine wanted to raise of his recent swim from Camiguin Island to Talisayan, Misamis Oriental.

“I am saddened by the ongoing war in Marawi City,” he told Newsline in a private message sent to this reporter. “This swim is my humble contribution to promote peace between our brother Muslims and Christians in Mindanao.”

After battling a very strong current and rough waters for seven hours and 47 minutes logging 23.15 kilometers, Atty. Macarine finally set foot on Calamcam Beach in Talisayan. He swam all the way from Guinsiliban Port in Camiguin.

“Our original landing point was Balingoan Port, but I was carried away by a strong current,” said the swimmer who was born and raised in Placer and Malimono in Surigao del Norte.

The lawyer, dubbed as “Pinoy Aquaman,” was expecting somewhere between three to four hours swim. But it took almost double the forecasted swimming time. “The strong current was totally unexpected,” he disclosed.

Triathlete Gilbert Grado, municipal accountant of Mambajao municipality in Camiguin later joined him as his “swim pacer for the last few kilometers.”

“My spirit and will to continue was lifted when you jumped and accompanied me while I was approaching Sipaka Point,” Macarine wrote in his message.

A proud Bisaya, Macarine has already stacked more than two dozen open water swims in his résumé, here and abroad. He is the first man to swim from Basul Island to Surigao City — a distance of 4.2 kilometers in just two hours.

He swam the 12.8 kilometers distance from Hikdop Island to Surigao City in 3 hours and 38 minutes, making him the first person to do so. He is also the first man to conquer the Babuyan Channel by swimming from Palaui Island to Sta. Ana in Cagayan (7.2 kilometers in 2 hours).

He has already conquered the Cebu Strait by swimming non-stop the 16.8-kilometer distance from Cabilao Island of Loon, Bohol to Argao in Cebu.

His most recent record was when crossed the icy-cold water of Hudson River in New York in a distance of 8.4 kilometers last month.

Like most sports personalities, Macarine doesn’t smoke but he’s a social drinker. “During parties or some occasions (which is very rare), I drink one or two bottles of beer or a glass or two of wine,” he said. “No hard drinks for me.”

As a swimmer, he follows the Marathon Swimming Federation Rules. It means no floating aids of any kind, regular swim suits only, and no physical contact with another human being or with the boats.

Macarine is married to Raquel, with whom he has two children: Lance and Colyn. “My open water swimming is just a passion and a way to promote by environmental advocacy,” he pointed out. “I just want my children to experience the pristine waters that I enjoyed when I was growing up in Surigao.”

When asked if he were a fish, what he would be, Macarine replied: “I would like to be the great white shark. This particular shark specie is one of the endangered ones as they are being hunted by man for shark fins, teeth and as a trophy for sport fishing.

“Just like our marine environment is being threatened by water pollution overfishing and global warming,” he further said, “I would like to swim also for shark protection.” (Photos courtesy of Atty. Ingemar Macarine)