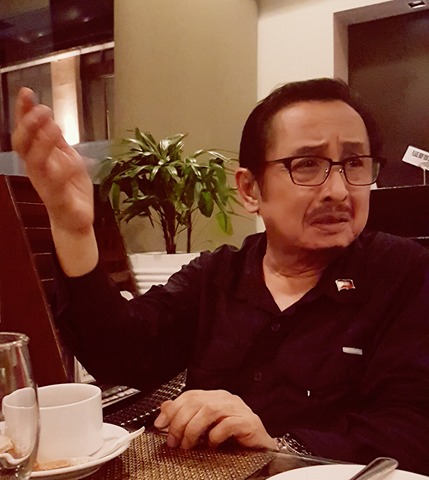 DAVAO CITY, Philippines— He was born and raised in Marawi. he joined the Moro national Liberation Front (MNLF) in the hope of raising the real voice of his roots-Maranao, he joined government to personally help his people.

Development was on sight, but everything turned upside down when Marawi City was attacked on May 23. When he went home last week, the once brisk and happy hometown turns a picture of a ghost city beyond his expectation, a city in rubbles.

Datu Hj. Abul Khayr Dangcal Alonto,  Secretary of  Mindanao Development Authority (MinDA), a staunch supporter of the Bangsamoro Basic Law, was teary-eyed when we talked about Marawi “I melt, I was so devastated, I cannot believe, but It is how it is now, but I know we will rise, babangon ang Marawi, Babagong kami  (Marawi will rise again, we will rise).”

He is the first Muslim Chair and Secretary of the Mindanao Development Authority (MinDA), his appointment is in time as the administration of President Rodrigo Duterte, who hails from Mindanao, is working for a peaceful Mindanao.

He studied Political Science at the Cairo University in Egypt, but was a San Beda College Law student when the Jabidah Massacre occurred on March 18, 1968. Immediately after the incident, he organized the LAM ALIF, a Muslim Youth Group of which its members became the core leaders of the Moro National Liberation Front (MNLF).

He worked underground for years until elected as  Vice Mayor of Marawi in 1972, he awarded as the youngest city executive of the country during that year.

He served as Acting City Mayor of Marawi in 1974.

After the 1976 Tripoli agreement was signed, Alonto was among the active players in the institutionalization of the Autonomous Region in Muslim Mindanao.

In February 2014, the original members of the MNLF Central Committee installed Secretary Alonto as Chairman of the MNLF.

Last week, Alonto was on top of his schedule when I met him late night, he looked a picture of a fulfilled academician and father when we shoke hands. But as we start to talk about Marawi his face turned grim, he was holding emotions.

“Masakit eh (It hurts) , noon I joined the MNLF because I wanted our voices be heard, until we met the government during  the Tripoli Agreement, I was full of hope, hoping that our voice, the voices of the Muslim in Mindanao for justice will be given justice, but peace is elusive, until now the dream remains a dream,” he narrated.

The Wikipedia of Alonto reflects his strong desire for peace.

Until the fateful May 23, 2017 attack in Marawi happened, Alonto described “I thought it was just like a fight which will last for few days but I was wrong, the fight is still on-going and my family, my people are now scattered all over for safety.'”

Alonto lately frequented Marawi as chair of the MinDA,  his face turned grim as he narrated “Everytime I see the my birthplace, I melt, I cannot believe, our homes destroyed and the people are nowhere to be found, Marawi, is not the same each day of the fight.”

Being the chair of Mindanao’s most influential agency, Alonto believes Marawi will rise again.

Gripping his hands, facing the class wall of the hotel with conviction, Alonto   strongly believes Marawi  will rise above the rubbles of war  “Maranao’s love peace, we will rise and I know we will at home, in peace one day. We will rise again, as peace loving people, as Maranao’s”.-Editha Z. Caduaya/Newsline.ph