Posted on July 24, 2017 by NewsLine Philippines 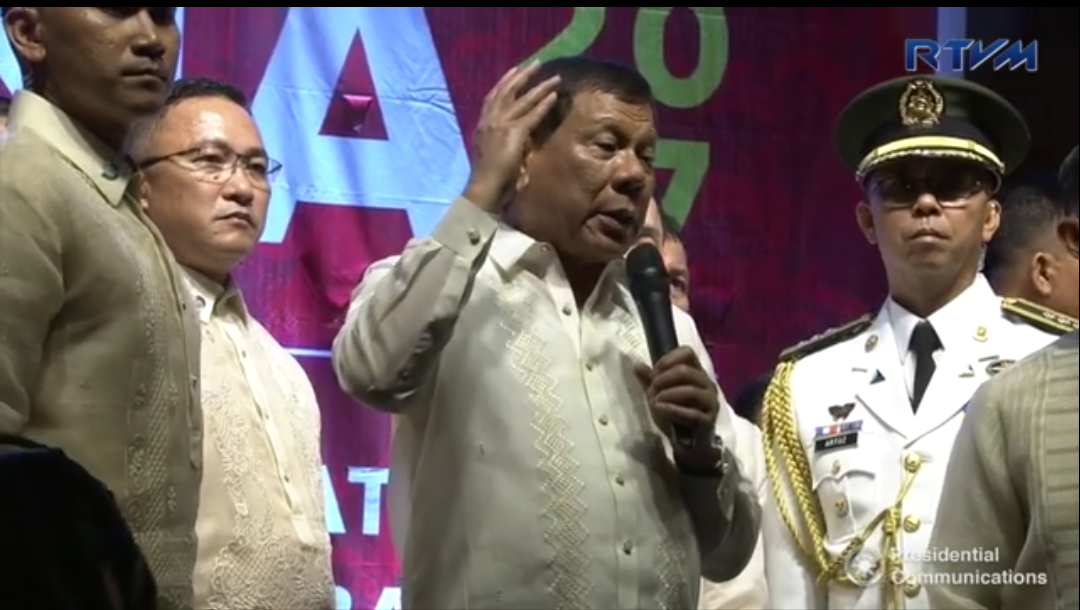 DAVAO CITY, Philippines— Protesters of the second State of the Nation  Address (SONA) were caught  off guarded when suddenly President Duterte took their stage and talked with them as he  asked for mutual respect.

After his two-hour ten-minute (2:10) SONA Duterte  went  to see the protesters mostly composed of militant leaders and their allied organizations.

He told the group to ask their representative in government (referring to the cabinet  secretaries who are allied with the militant groups) what has been done by his administration for the last twelve months instead of heckling him.

Duterte was welcomed onstage by the protesters with boos and chants of “martial law, never again.”

But Duterte warned them should they persist in heckling and lambasting him, it would be “the last time I will talk to you.”

“My relationship with the left is still okay. Don’t destroy it because everyone will be affected. Let’s keep the line open,” he said. “If we don’t give each other respect, if that’s what you want, I can give it to you. I am not intimidated by shouts. You can shout till you lose your voices.”

It was first time in the record of a SONA when a president talked with his protesters.

President Rodrigo Roa Duterte visits the rally being staged by the protesters and gives a brief message to the rallyists after delivering his second State of the Nation Address (SONA) at the House of Representatives in Quezon City on July 24, 2017. #DuterteSONA2017

Posted by Presidential Communications (Government of the Philippines) on Monday, July 24, 2017

“Ask them what I have been doing. You are rushing me… You should give me time. I still have five years but I’m telling all of you, I will deliver. I will deliver,” Mr. Duterte said.

The militants kept on chanting anti-fascist and anti-imperialist lines  as Duterte spoke to them.

Duterte even reminded the protesters he was once one of them during his teenage life.

The president took time in explaining the program of his government on land reform, poverty alleviation and labor issues.

Militant BAYAN leader in a statement posted on hsi facebook wall said “What the President did, speaking at the Bayan rally after his SONA (on his own initiative), was unprecedented. That much is true. However, it would have been more meaningful if he made clear commitments on the basic issues of the people. The audience’s strong negative reaction and feeling of dismay come from the President’s lack of positive responses to the issues they posed, including the peace talks, political prisoners, contractualization, land reform and so on.”

Reyes added “He made no commitment to resume peace talks and instead repeatedly harped on a fictional “ambush” against him. When asked about land reform and contractualization, he pointed to his cabinet secretaries. When asked about releasing political prisoners, he said the military will object. Those responses did not get him adherents at the rally for sure. “The people, not the military, are your bosses,” the crowd reacted.”