Posted on July 29, 2017 by NewsLine Philippines 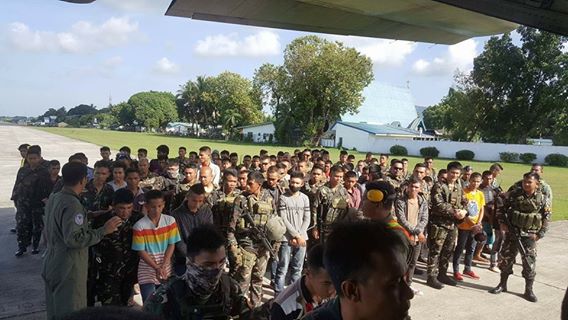 BASILAN, Lanao del Sur— Some Fifty-nine suspected recruits of the Maute terrorist group are now facing rebellion charges before the Department of Justice (DOJ).
The new recruits were arrested in in Zamboanga City and was later presented before the panel of prosecutors chaired by Senior Assistant State Prosecutor Peter Ong.
From Zamboanga del Sur there were  brought to Manila Friday via a C-130 plane of the military. Among those arrested is MNLF member Nur Supian who was pointed by the arrested suspects as their recruiter.

During the proceedings, the suspects signed their waiver of detention and decided that the panel of prosecutors proceed with the conduct of a preliminary investigation.

Ong asked the arresting officers to present photographs of the plate numbers of the two vans that carried the 32 respondents. They were also asked to present the certificate from the MNLF saying that the MNLF identification cards found in the possession of the respondents were fake.

The hearing, which was supposed to have started at 1:00 p.m. was moved to 3:45 p.m. since they waited for the arrival of the 59 suspects who arrived at Villamor Airbase Friday afternoon from Zamboanga.

From Villamor Airbase, the suspects were transported on board an Army bus to the DOJ.

The arrested suspects would be detained at Camp Bagong Diwa, Taguig City.

Ong scheduled the start of preliminary investigation on August 14 at 2:00 p.m. where the suspects are set to submit their respective counter-affidavits on the accusations against them.-Richard Falcatan/Newsline.ph  with reports from PNA