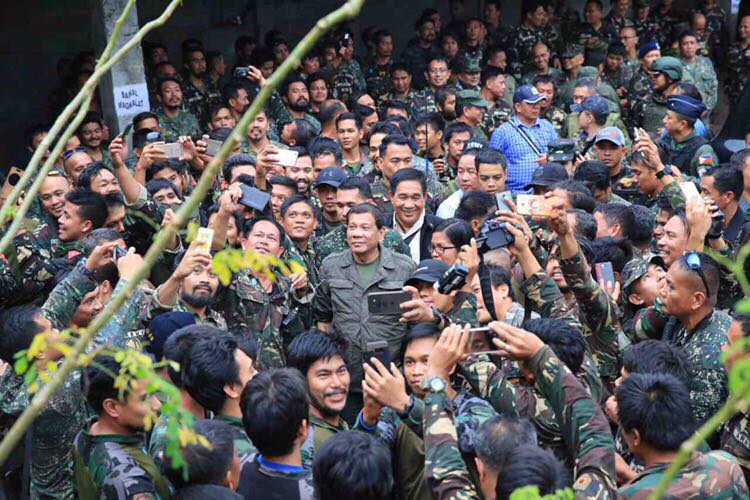 Duterte was inside the main battle area to encouraged  government troopers to stay alive and “practice caution until the end of the war.”

“Malapit na itong matapos, konting tiis nalang. Just make sure na buhay kayo pag natapos itong gyera na ito (We are nearing the end, a little patience. Just make sure you are all alive after the war)” ,  Duterte the soldier and policemen.

President met with ground commanders who are in the main battle area, “to show them that he is, all the way, with them in this fight.” Unmindful of the rain, Duterte spent   20 minutes  for  “selfies and groupies with the troops.”

He also  distributed G-shock military watches and other goods as well as inspired the troops in the front line in Marawi City.

President met with ground commanders who are in the main battle area, “to show them that he is, all the way, with them in this fight.” He re-echoed his pledged to put up a PhP50-billion trust fund for the soldier’s and policemen’s dependents. Scholarship grants will also be accorded to the children of uniformed men.

Duterte’s visit boosted the morale of the government troops.

In expressing gratitude for his invaluable support, soldiers took an improvized placard to thank their commander-in-chief.