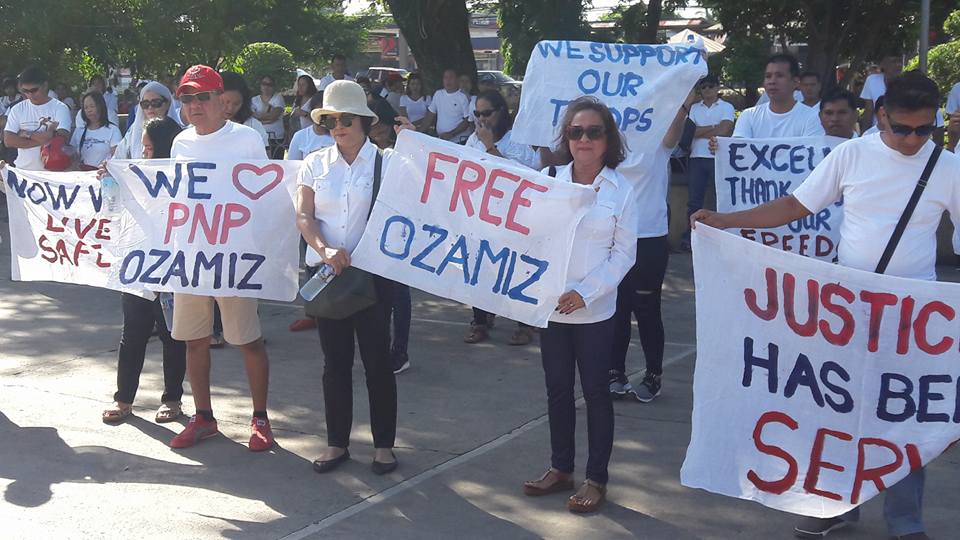 DAVAO CITY, Philippines— Peace-loving citizens of Ozamiz City held an interfaith rally  to thanks authorities for the regained peace in the area.

The rally held Sunday at the City Hall of Ozamiz was participated by religious leaders and socio-civic groups lauded the police authorities and president Rodrigo R. Duterte for solving the long drugs and criminality problem in their city.

The residents held a rally following the much-published death of their Mayor Reynaldo “Aldong” Parojinog his  wife Susan, his brother board member Ocatavio  and siter Mona.

Mayor Parojinog was killed  in a dawn raid Last July 30 in his house which resulted to the killing of 15 people and arrest of his daughter Vice Mayor Nova Princess Parojinog and son Reynaldo Jr.

For the past decades, news about Ozamiz City was always  highlighted with the existence of the dreaded Kuratong Baleleng bank robbery  group and the “Martilyo” gang and the proliferation of illegal drugs but no one dares to speak up because of fear.

Pastor Nathaniel Dinoro in his speech said “Ozamiz City is a silent society, no one dares to speak against the evil perpetrators because we are all afraid.”

In the Ozamiz City facebook page, this video by Mindanao Broadcasting Channel was posted.

Part of the message of Pastor Nathaniel Dinoro during the community prayer at the city hall ground today August 6,2017.Watch the full coverage at MBC later on.

Dinoro asked the people “Ayaw mo kahadluk ug naay pulis moadto sa inyong balay nga naka-trigger na daan, kung wala mo’y angayan kahadlukan (Do not be afraid if the police go to your houses trigger-ready if you have nothing to fear).

People of Ozamiz, he said never said anything against criminalities  from illegal drugs to rape and robbery “No one tells the truth because we were all afraid,” Dinoro said in vernacular.

According to Brgy Captain Ludivina Macayran the purpose of excavation is to end the so called hearsay among the populace in the area that there were victims of murder being thrown there.

Macayran received complaints from the residents in the area about a foul odor sometime in February so the council decided to fill the big holes with trucks of soil.

When the backhoe digging the holes, sacks of garbage were excavated and there were two sacks tied with rope containing bones and feathers of animals .

Espenido said he ordered the excavation to know how true the revelations about the so called secret mass grave in Ozamiz.

The excavated bones will be sent to the crime laboratory to determine if the bones are from humans or not.-Editha Z. Caduaya/Newsline.ph