Mercedita, an OFW dies on the day she was coming home 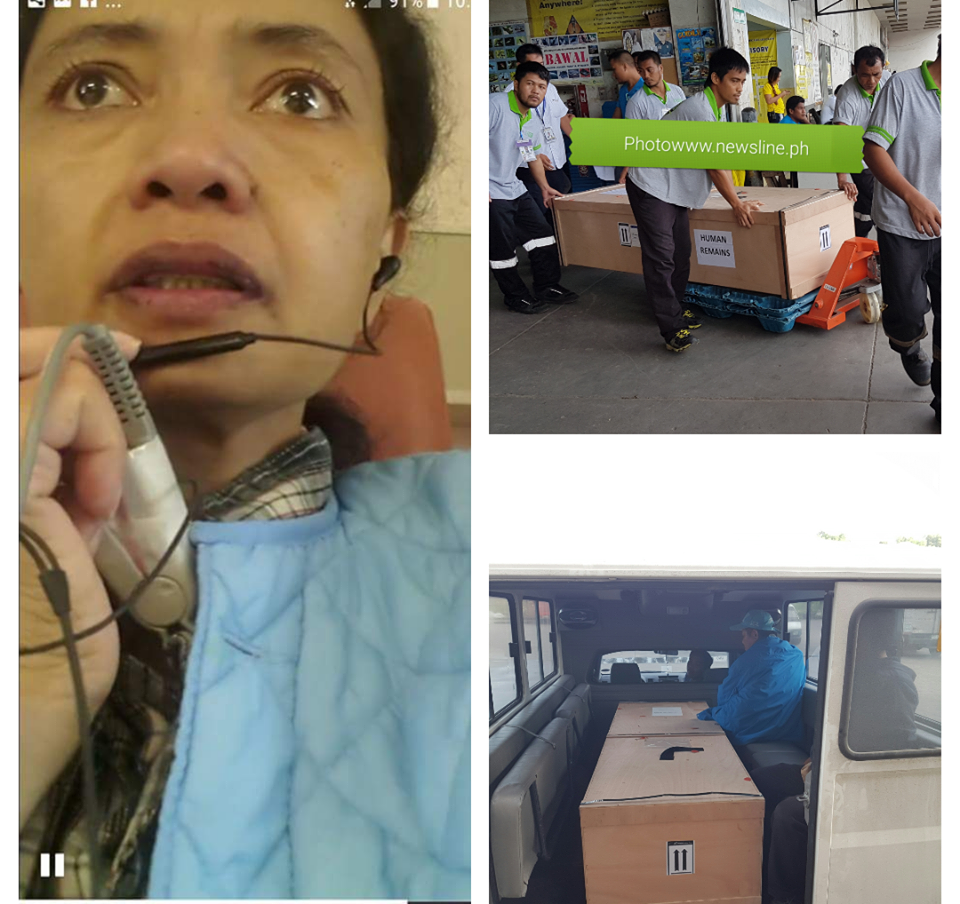 DAVAO CITY, Philippines— When she left her village in Camada, Magpet, North Cotabato in 2009, Mercedita Villosido Castillano was  full of hope she can send monthly remittance for the two children she left behind.

The first employment in Hongkong was fine, the family was able to redeem the land they pawned for her placement and processing fees.

The second trip gave her the chance to fend for her family as everything was good. But her last employer maltreated her, she asked to be released but on the day she was allowed to leave her employer, the wife tattered her passport into pieces.

Distraught and depressed, she sought help from the Philippine Embassy in Hongkong which granted her the exit pass, a pass she never used as she was battling to send money for her kids (one of them is a special child), leaving her with no choice but work undocumented.

One day, when the Hongkong government had a massive crackdown on illegal migrants, she voluntarily surrendered and was placed in a correctional facility, Mercedita’s life began to grim.

While in detention, depression and other complications developed, in May 2017, she was sent to Queen’s Mary Hospital for the much needed check up. Lingering illness led to hospital confinement where she was discovered to have ovarian cancer— this time stage 3 as diagnosed.

Fellow OFW’s who visited her in the hospital shared some Hongkong dollar for her to buy on things she needed confined. But  unknown to them those amount they gave was the same amount she sent to her family, even if she was at the hospital bed, her niece Grace narrated.

On July 7, 2017 news broke off, Mercedita on her hospital bed sent a  video message through Duterte Die Hard Supporters OFW group in Hongkong, asking President Rodrigo R. Duterte for help and  bring her home as she wanted to spend her remaining days with her children.

Upon learning the condition, the Office of the President  immediately instructed the embassy in Hongkong to repatriate Mercedita, exit documents were facilitated but it took sometime as the hospital and the embassy needs to prepare some equipment for her safe travel.

Mr. Chico, the office on case of the International Social Services Department in Hongkong helped in the facilitation for the immediate repatriation.

On July 26, the family was informed, Mercedita will be was coming home  July 28, flight details were sent. She  will arrive in  Davao City at 7:00 in the evening.

The family through her niece Grace and her husband Albert prepared to meet her as scheduled.

But at 10:00 in the morning of July 28, while Alberto, Grace and other  family members were en route to Davao City to fetch her, they got a call from the Overseas Workers Administration Davao officer (OWWA), Mercedita passed away while she was being prepared for her 1:30 Hongkong-Manila flight.

The excitement turned grief, there was total silence inside the van and later sobs were heard, as they realized Mercedita is not coming home alive. Instead Albert and Grace were advised to proceed to OWWA Davao to sign documents to facilitate the shipment of her cadaver the soonest time possible.

On Thursday, August 10, at 7:00 in the morning, Albert  and Grace (Mercedita’s niece) finally fetched Mercedita— this time in a casket at the cargo area of the Davao International Airport.

When the cargo personnel held the trolley with a wooded box Albert walked slowly to see what was written, it says  “Human remains” he stood beside —no teardrops–but he was in in deep sigh.

The OWWA representative  family Marjan Lolit Salazar who met the family at the airport explained, Mercedita’s could have had the full government assistance had her Social Security Service (SSS) contribution reached the minimum requirement as set by law and the agency could have gave her some benefit due to cancer  but still everything seems to have fell short.

Consoling the family, Salazar told Albert and Grace is still entitled to Welfare Assistance Program (WAP) which is P20,000 while her SSS burial benefit amounting to P20,000 will also be released to the family upon presentation of proper documents.

Given the financial constraints, the Office of the President intervened and shouldered Mercedita’s  local  transport and handling costs to reach her home.

Mercedita’s children were waiting for her return at the funeral homes at Wood Haven Kidapawan City, as they were told, their mother died as she eagerly wanted to come home.

Now that the family is reunited, Albert described the reunion “hilum nga panagkita Mam, sakit pero ingon ani na jud ni, ana man ang kinabuhi (This is a silent reunion Ma’m, painful, but this is it, that is life!).-Editha Z. Caduaya/newsline.ph