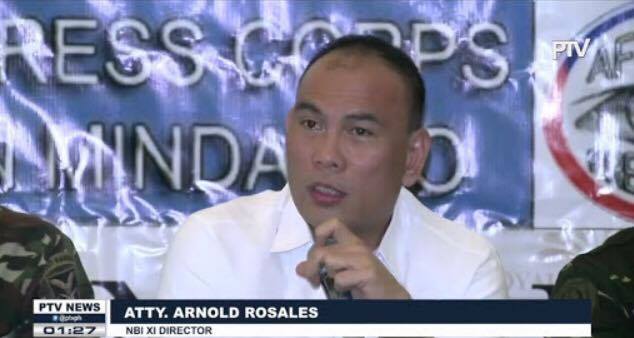 Hernandez said the order stated “In the exigency of service” Rosales is transferred to the Autonomous Region in Muslim Mindanao (ARMM) effectively immediately.

Hernandez, son the the late NBI XI director  Atty. Eufronio Hernandez  is now the officer-in-charge of the NBI XI.

Rosales in media interviews strongly denied the allegations saying “he has not and would never accept cash from anyone that will place the bureau in jeopardy.”

He emphasized that the raid was legitimate and there was no money involved.

The NBI raided Plaza Roman KTV Bar on August 7 at around  9:00 p.m. They  arrested the owner Efren Miguel Aquino and floor manager Alfreda Maghari, the two were brought to the NBI office along R. Magsaysay Avenue on same night.

Aquino in an affidavit alleged   while he was at the NBI office, agent Atty. Glenn Damasing asked him to produce P500,000 “for the boys” to fix the case,  but on August 8, 2017 they were charged for human trafficking in court.

Aquino claimed Damasing told him to  find a way to connect to  NBI director Dante Gierran or Rosales to fix the case.

Aquino’s affidavit added he was referred to Atty. Raleston Falcutila, who is reportedly  a brother of Rosales.

Falcutila then acted as their lawyer and assured them they case will be fixed but  still cases were filed in court and the P500,000 delivered.

The NBI charged   Aquino  and Alfreda  Maghari before the City Prosecution Office for violating  “Anti–Trafficking in Persons Act of 2003″.

On August 8, Aquino and Maghari posted  P200,000  each for their temporary liberty.

In her affidavit, Aquino’s Charina wife stated  she handed a plastic bag to Atty. Falcutila while inside their white pajero after they posted the bailbond.

The same affidavit of Mrs. Aquino stated Falcutila delivered the money to Rosales in Holiday Spa at about 6:30 in the evening of August 8.

Rosales denied all the accusations of the Aquino’s he never received any money but admitted receiving a pack of Korean Ginseng tea  from Falcutila as a birthday gift.

The stories carried by newsline.ph was based on the affidavit executed by Aquino and his wife Charina and other persons who executed an affidavit.

The incident is being investigated by the internal affairs division of the NBI  central office. The Presidential Management Staff under the  Office of the President has referred the case to the Criminal investigation and Detection Group (CIDG) Davao field office.-Editha Z. Caduaya/Newsline.ph