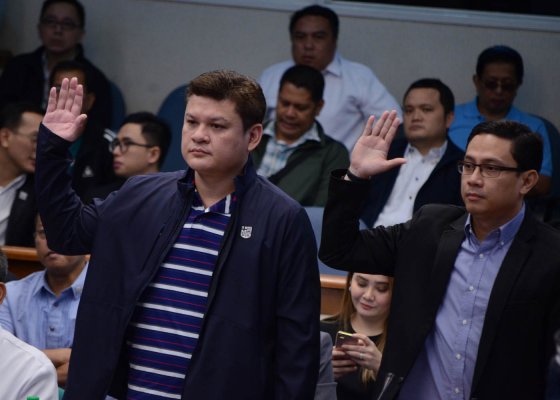 DAVAO CITY — The accusations of Senator Antonio Trillanes are baseless and full of lies, this how  Presidential son and Davao City Vice Mayor Paolo Duterte and brother-in-law Manases Carpio manifest during the Senate hearing as they denied involvement in the P6.4-B illegal drugs shipment from China.

In his opening statement, Duterte said “kinahanglan mobarog ko alang sa akong pamilya. labi na gayud sa akong mga anak nga maoy nahilabihan nga naapektuhan sa aning pagpangdaut kanako (I need to stand for my family especially for my children who are very much affected because of the malicious issues against me).”

Duterte and Carpio  said they showed up “in compliance with the invitation of the Senate blue ribbon committee” and as a “gesture of respect to the Senate as a whole.”

The two denied  knowledge of and involvement in the illegal drug shipment from China.

Both Duterte and Carpio  denied knowing Customs broker and fixer Mark Taguba who initially claimed that he and Paolo Duterte facilitated the illegal shipment.

Taguba however, recanted his statements sayings he cannot provide proof about the allegation as we only heard it from the grapevine.

Carpio, a lawyer by profession said he met then Customs Commissioner Nicanor Faeldon because his Davao client Rodolfo Reta Rodolfo Reta who used to own and operate  the Acquarius Container Yard (ACY), but  Davao Customs collector questioned the operation after Reta exposed anomaly inside the Davao port.

Reta exposed his discovery of 40 container vans which was declared construction materials but turned out smuggled rice.

He explained that as a lawyer by profession, his practice involved representing clients in courts including the Bureau of Customs (BOC).

Duterte’s lawyer Rainier Madrid however said Trillanes was on fishing expedition and his accusations are baseless, full of deception and lies.-Editha Z. Caduaya/Newsline.ph