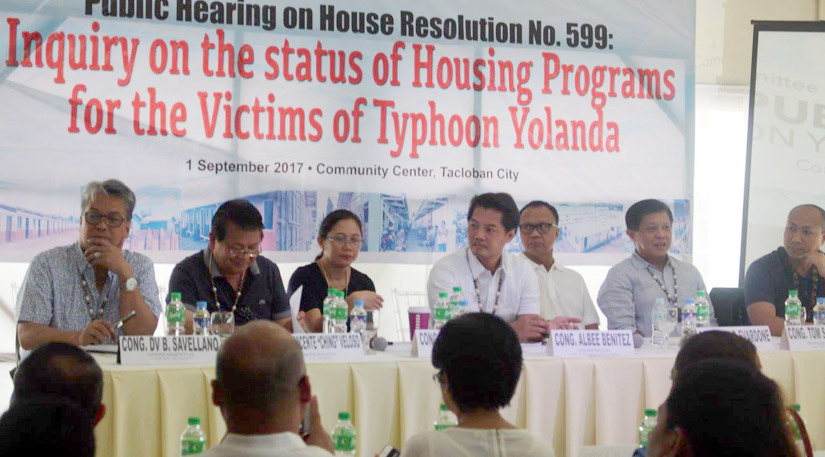 Marcelino Escalda Jr.,  NHA general manager revealed they issued show cause order to twenty contractors to explain why they should not be charged and   blocklisted by the agency.

The P75.7 billion Yolanda housing project undertaken during the administration of former President Benigno Aquino is now a picture of a failed government promise which added insult to the agony of the thousands of super typhoon survivors.

With the multi-billion fund, Escalada said “somebody has to be made accountable.”

The show cause order was issued Thursday last week and the seven day period will lapse this Friday “Afterwhich ” we will determine legal remedies  to held them liable for the violations.

Negros Occidental Representative Alfredo “Albee” Benitez, chair of the Committee on Housing at the Congress on September 5, 2017 said his investigation on the Yolanda housing revealed that contractors used sub-standard materials in the project.

The NHA constructed thousands of houses for survivors of the Super Typhoon Yolanda (International name Haiyan) hit Tacloban in 2013 but residents complained defects in their  houses, from sub-standard construction materials to unfinished partitions.

Due to numerous complaints, Eastern Samar Rep. Ben Evardone, conducted an inspection on the projects which according to him he has found mediocre structures.

In a report of ABS-CBN, it quoted Benitez saying he saw “glaring substandard” construction of facilities for the housing projects.

The same report stated Benitez met a whistle-blower who testified under oath during their formal hearing that the materials used in the construction of homes were subpar.

The committee found an engineer,  Camilo Salazar, a subcontractor for some of the housing projects in Balangiga, Eastern Samar.

Salazar, according to Benitez, supplied labor and materials and was supposed to handle around 100 housing units.

Congressman Evardone said the NHA failed to monitor the housing projects and the principal contractor identified only as a certain JC Tayag.

Escalada who assumed office only last year welcomes the House “We cannot afford to let go the contractors who failed to deliver the goods as prescribed in the contract with the NHA, we need to determine who should be held accountable here.”

Congressman Vicente Veloso of the 3rd Legislative District of Leyte claimed his district has not received any funds for housing nor has the government placed a housing site in their area.

Veloso  plans to file charges against Tayag and other individuals linked to the poor construction of houses.

The ABS-CBN report quoted Veloso “I would say JC Tayag was guilty of Estafa when he [and his] corporation impressed upon the government [na] kaya niya magpatayo ng livable, matinong mga bahay only to find out very, very substandard ang ginamit na materials,”

Escalada emphasized “The NHA is the victim here, it entered a contract with a contractor who failed to deliver the program. But, the previous officials should also be held accountable because failed to supervise nor monitor the implementation of the project, these defects could have been averted should the government done its part to ensure that the program implementation was in accordance with the contract.”

With what has happened, Escalada said “we are supporting the move of Congress in investigating the projects and held responsible those who added to the misery of the people.”

The lessons of Yolanda housing projects “Should give lesson to government agencies like us and the contractors, We will do our part to ensure that programs are properly executed and for contractors to follow the program of work or face the risk of getting blocklisted.”

For those who were issued show cause order, Escalada said “We will listen to their side and allow our legal division to review their comment and coordinate with the House for proper action.”-Editha Z. Caduaya/Newsline.ph