Philippine Scout Rangers to own home by 2018-Duterte 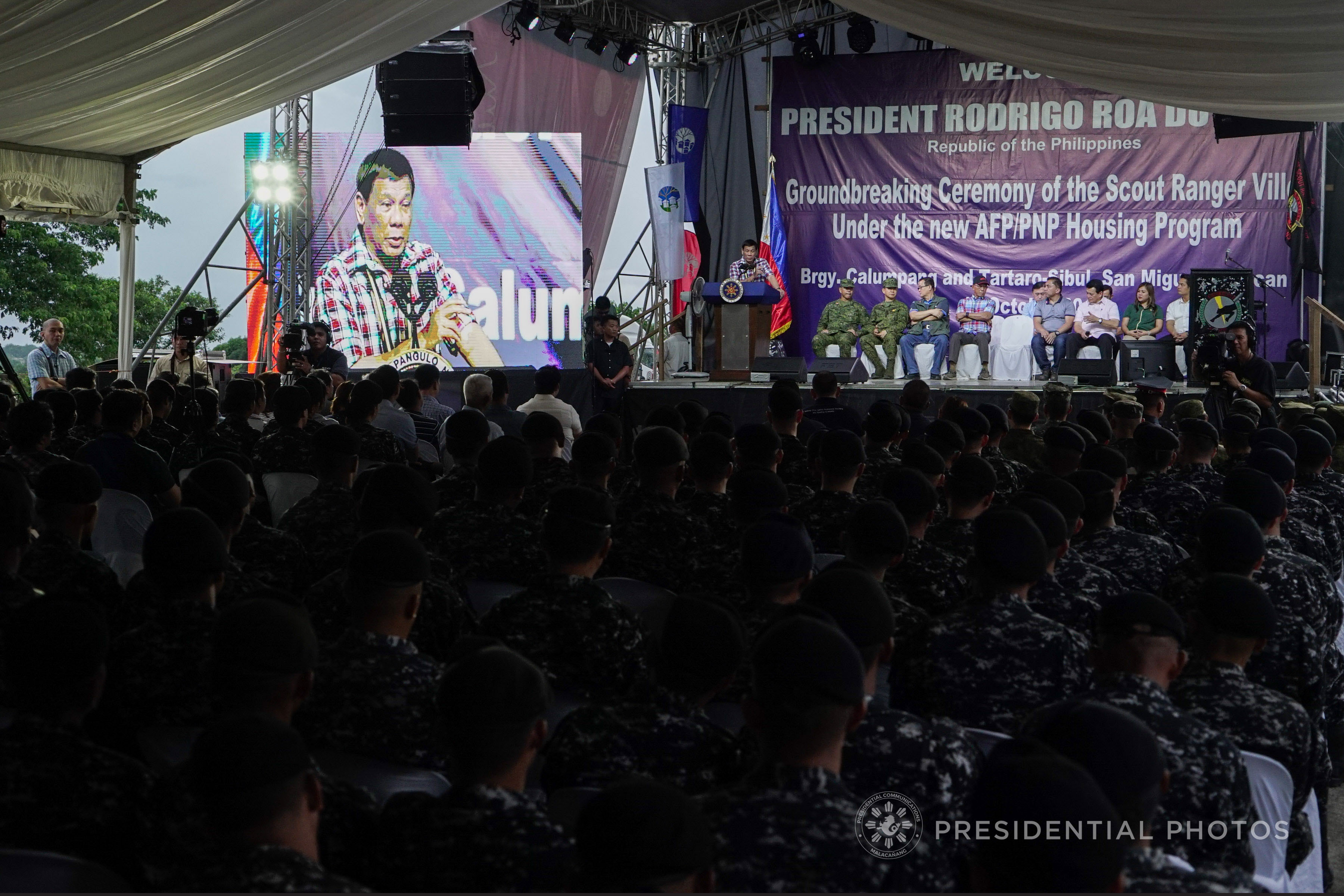 DAVAO CITY, Philippines — If plans will be implemented as  scheduled, on December 2018, troopers from the government’s scout rangers will finally own their own homes.

This after Philippine President Rodrigo Duterte   Wednesday, October 11, led the groundbreaking ceremony of a housing project  in San Miguel Bulacan  for the Scout Rangers.

For ages, the government has taken for granted the basic program it is supposed to provide it’s people-shelter. A reason, why the number of informal sectors continue to bloat and  the increase is  unstoppable because it’s own agency cannot provide  hoe for it’s employee.

During the last decades, the National House Authority (NHA) was engrossed to providing houses for individuals working in the private and big business groups  because it so focused on revenue generation and not providing shelter for its supposed beneficiary.

During the previous administrations, the  NHA, also undermined their  very own  mandate  as socialized housing program was never given due attention.

On Wednesday  During the groundbreaking of the  project, Duterte   made a vow,  “So by December hopefully, by the grace of God, we will have your units ready.”

The National Housing Authority project, under the AFP/PNP Housing Program, will provide 1,000 housing units for the members of the 1st Scout Ranger Regiment. The Chief Executive also announced that aside from the houses, the soldiers will also receive PHP70,000.

Marcelino Escadala Jr., general manager of the NHA revealed the Department of Budget and Management (DBM) will provide P200-million subsidy to realize the  project.

Escalada said  the  mass housing program for the Scout Rangers will rise in a portion of the 50-hectare property of the Manila Banking Corporation (Manilabank).

An agreement has been entered between the key players of the program which include the NHA, ManilaBank,  Department of Budget and Management (DBM), National Housing Authority (NHA), Pag-IBIG Fund, Housing and Urban Development Coordinating Council (HUDCC) and the Scout Ranger Multi-Purpose Cooperative.

Duterte also instructed government agencies to make sure the materials for the housing programs follows the housing standard as he mentioned the voluminous problems concerning the Yolanda (super typhoon Haiyan)  housing project in Leyte which until now has yet to be finished and materials used were found sub-standard.

The Aquino administration embarked on a multi-billion housing program for the Yolanda survivors but the project is hounded by controversies as its beneficiaries complained so many defects in their units from lack of facilities to sub-standard construction materials.

The NHA has earlier issued show cause order to 20 Yolanda Housing project contractors.

For the Scout Rangers housing project, Escalada said “The President has given us specific instructions, we have to deliver the goods as expected beyond question.”