Duterte to future leaders: Be good 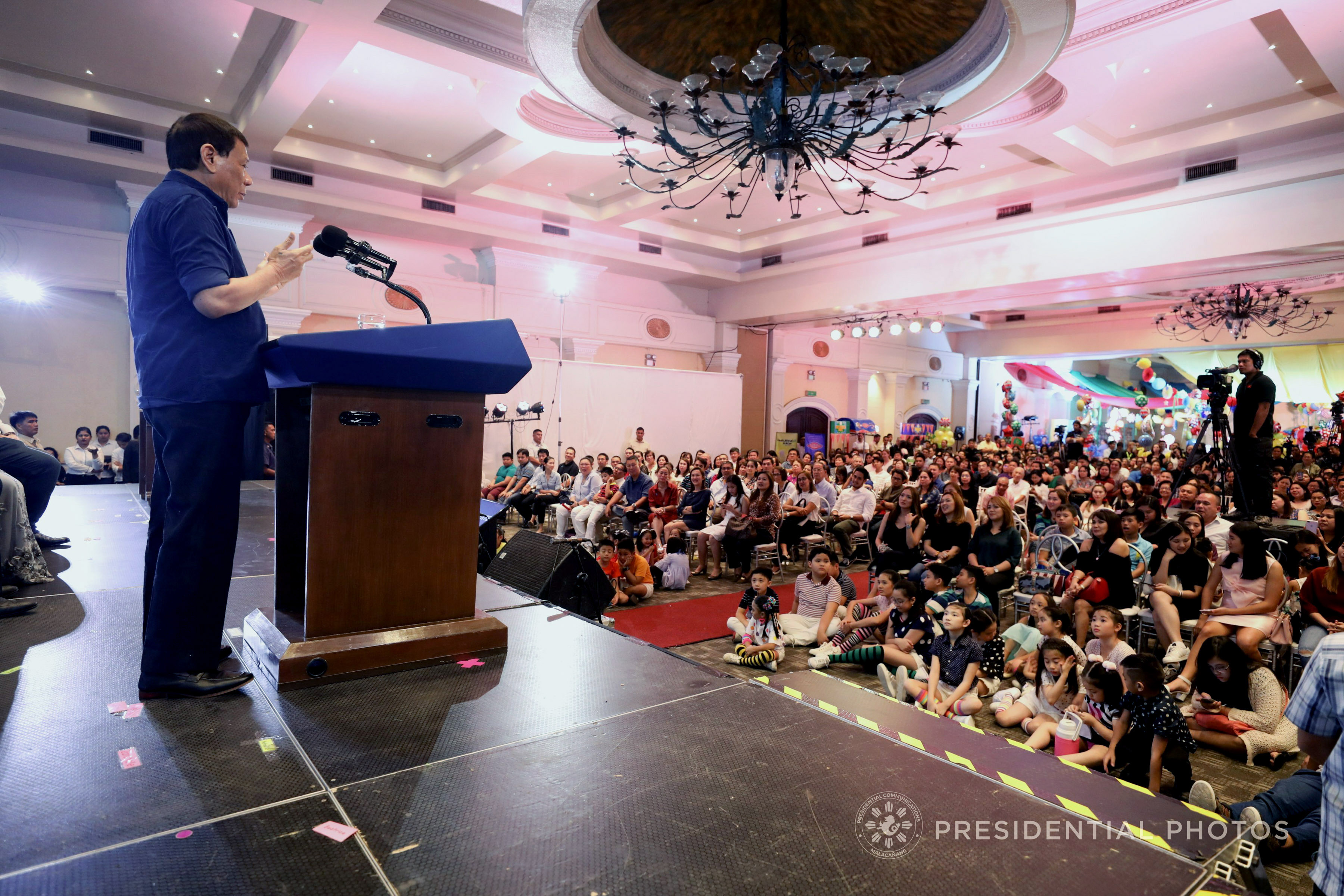 DAVAO CITY, Philippines —  Just like any parent, President Rodrigo Duterte can only advise children to be good and not to give their mother and father any problem.

The President had to find the right words to communicate with his youngest audience so far — the preschoolers of the Center for Brighter Beginnings, Inc (CBB), a pioneering center specializing in Early Childhood Education in Davao City.

Taking notice of one girl biting her nails, Duterte admitted he has the same habit when he ponders over things that he wants to do for everybody.

“Alam mo anak, alam mo bakit minsan nakikita ninyo ako nagagalit sa TV? Kasi yung mga bad people, ayaw ko sila dito sa mundong ito. Kaya gusto ko silang mawala para wala ng gugulo sa buhay ninyo (You know my child, you know why you see me angry on TV? Because of the bad people, I don’t like them here in this world. So I want them gone so that no one will make trouble),” the President said in his conversation with the children Friday night at the Davao Convention Center.

Duterte expressed his dream for the children to have a peaceful place to live in the future.

“At pag lumaki na kayo kagaya ng mama mo pati papa, ang buhay ninyo ay hindi masyadong problem. Walang gulo, walang mag-snatch, walang mag-kidnap (And when you grow up like your mama and your papa, you will not be in trouble, no more snatching, no one will kidnap),” he said.

He said he wants a world for good people only.

“Yung hindi matino eh magkakaroon tayo ng problema dyan. Magagalit talaga ako (Those who are not good we will have problem with that),,” he said.

This as the President explained on why his critics are calling him “bad boy” and accused him of hurting bad people, sendig them to heaven.

“Sabi ng iba, bad boy daw ako kasi sinasaktan ko daw yung mga taong masama at minsan sabi nila, pinapadala ko sila sa heaven, mauna na sila sa atin kaya ganun (Some people say I am a bad boy because I hurt bad people and they said I send them to heaven, so they go ahead of us),” he said.

Duterte, however, said that as a government servant his work is to protect the people and the country to preserve its sovereignty.

“Yung nakita ninyo (What you are seeing), everything is working, functional at walang problema (no problem),” he said.

And to their parents, the President said that what he had told the children was “compassion that I’ve learned in the years that I have been in service in the government”.

Duterte said his vow of protecting the people and the country is the same when he was the mayor of the city.

When he became President, Duterte said he is seeing how things would evolve in a country and in communities.

“Ganun din ang sinabi ko (That is also what I said). Do not destroy my country and do not destroy our only assets in this planet, our children,” he stressed.

The President proceeded on lecturing the different precursors and chemicals from cannabis, cocaine, heroin to shabu.

He said these are frequently used in the illicit manufacture of narcotic drugs and psychotropic substances.

He also shared state of narcopolitics in the country.

The President urged parents not to allow children to get involve in illegal drugs. –Lilian C. Mellejor/PNA