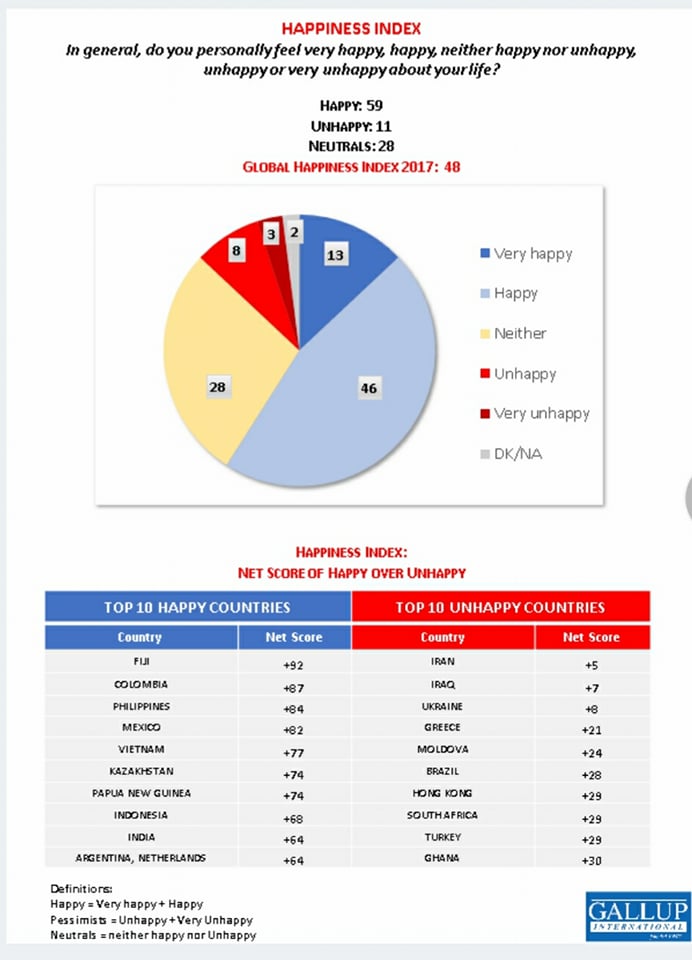 DAVAO CITY, Philippines — Filipinos are among the happiest people in the world.

In a global survey conducted by Gallup International survey which involved 53,769 individuals from October to December 2017, Philippines ranked 3rd happiest country next to Fuji and Colombia.

In its 41st annual Global End of the Year Survey involving 55 countries worldwide, the Philippines got a net score of +84.

Fuji ranked first as the happiest country in the world with +92, seconded by Colombia with +87.

On the other hand, Iran is the least happy country, with a net score of +5, followed by Iraq with +7, and Ukraine with +8.

The Philippines also placed 3rd among 66 countries in 2016, obtaining a net happiness score of +79, behind Fiji and China.

However, the world in general was less happy, said the Gallup International poll, with only a combined 59% of those surveyed saying they are happy (13% very happy and 46% happy). This was down by 9 percentage points versus 2016, when 68% said they were happy.

“2017 was a tough year with terrorist attacks over almost each week and it may have influenced personal lives all around the world,” said the survey firm in its report. “Nevertheless, a majority in all polled countries are happy.”

In the survey’s Hope Index, the Philippines tied with Kosovo in 8th and 9th places, with a net score of +40. Indonesia is the most hopeful country at +67, while Italy is the least at -41.

Hope on the planet Earth… but Lower

Happiness: A Less Happy World in 2017

About two-thirds (59%) of the surveyed world claim they are happy. This is almost 10 points lower than twelve months ago. 2017 was a tough year with terrorist attacks over almost each week and it may have influenced personal lives all around the world. Nevertheless, a majority in all polled countries are happy.

“The 55 countries show the emergence of a global society in which national borders are being overtaken by world-wide lifestyle segments. Thus, according to the survey, the attitudes of youth across the world are more similar to each other than to the older population within their own national borders. The same is true for survey findings across lifestyles characterized by Incomes and levels of Education.

Net Happiness across the 55 countries polled by survey is 15% point higher among the Young (under 34 years of age) than among the older population (above 55 years of age).

The analysis team of the global survey argues: Happiness depends less on the country in which you live and more on your Age, Income and Education profile or lifestyle.”

Malacanang on Tuesday welcomed  Gallup International’s survey showing the Philippines as the third happiest country in the world.

“We Filipinos are known as a happy, resilient people. We even manage to smile amid difficulties. It is therefore not surprising that we rank high in the global happiness index,” Presidential Spokesperson Harry Roque said in a press statement.