Posted on January 15, 2018 by NewsLine Philippines 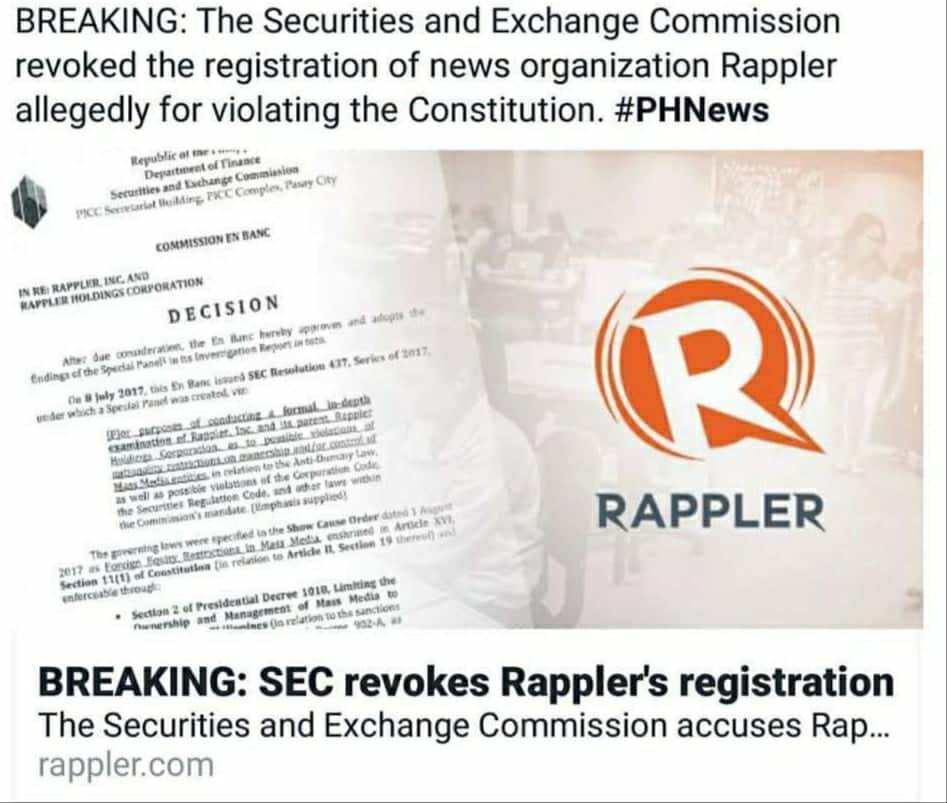 DAVAO CITY, Philippines — The Securities and Exchange Commission (SEC) revoked the certificate of incorporation of a news agency Rappler.com for allegedly violating provision sin the Constitution when it received $1 million from a foreign investor.

The SEC cited it’s rule in revoking the license of Rappler.com.

The 29-page decision, the SECsited that Rappler was liable for violating SEC rules by engaging in a fraudulent transaction and circumventing constitutional restrictions on foreign ownership.

It stated that Rappler “intentionally created an elaborate scheme” to justify the receipt of over a $1 million from a foreign investor, Omidyar Network, according to the SEC.

It was signed by SEC Chairperson Teresita Herbosa, and Commissioners Antonieta Ibe, Ephyro Luis Amatong, and Emilio Aquino. The fourth commissioner, Blas James Viterbo, did not took part in the ruling.

The SEC ordered the revocation of Rappler’s certificate of incorporation forwarded ethe same to the Department of Justice for “appropriate action.”

It stated, Rappler being a “mass media entity that sold control to foreigners” to undertake a “deceptive scheme to circumvent the Constitution.”

The ruling revealed a special panel was created in July 2017 to look into Rappler’s “possible violations of nationality restrictions on ownership.”

Rappler decried the decision as “pure and simple harassment,” an attack on freedom of the press. It said the ruling was “first of its kind in history – both for the Commission and for Philippine media.”

Rappler wrote “We will continue bringing you the news, holding the powerful to account for their actions and decisions, calling attention to government lapses that further disempower the disadvantaged”. “We will hold the line… We ask you to stand with us again at this difficult time,” it added.

Journalist associations are rallying behind Rappler.

The NUJP expressed its “outrage” and said it supported the online news agency.

In a statement, the NUJP stated “As it does so, the NUJP declares its full support to Rappler and all other independent media outfits that the state has threatened and may threaten to shut down. We call on all Filipino journalists to unite and resist every and all attempts to silence us.”

The group said the ruling against Rappler is just one of many threats of President Rodrigo Duterte against critical media, citing Duterte’s statements against Inquirer and ABS-CBN.

“The SEC has apparently decided to reject Rappler’s contention that its foreign investors merely placed money in the outfit but do not own it, which it issued after President Rodrigo Duerte, in his state of the nation address last year, threatened to have its ownership investigated,” NUJP said.

It addde “It was but one of many threats Duterte has made against media critical of him and his governance, such as the Philippine Daily Inquirer and broadcast network ABS-CBN, whose franchise renewal he threatened to block.”

FOCAP also expressed “deep concern” with the decision, which it said is “tantamount to killing the online news site” and an “assault against democracy.”

“[It] sends a chilling effect to media organizations in the country. Journalists must be able to work independently in an environment free from intimidation and harassment,” the group said

The LODI statement stated “We view the SEC action, which by some accounts seems rushed, as the logical next step to the DDS-initiated harassments, death and rape threats, and trolling against Rappler, its editors and staff. The threats come from the President himself who, like any garden-variety tyrant, is allergic to journalists who don’t follow or, worse, question his chosen narrative.”
.
“We call on our colleagues in the arts and media communities to expose and thwart any threat or act from the fascist Duterte regime to scare and terrorize us from defending democracy and promoting integrity. We must jealously guard what remains of our precious freedoms,” the group said.

A PDR is a financial instrument that does not give the owner voting rights in the board or a say in the management or day-to-day operations of the company. Several large media companies have PDRs.

The SEC itself accepted the Omidyar-related documents submitted by Rappler in 2015.

In a statement addressed to its readers and viewers on Monday, Rappler said: “The SEC’s kill order revoking Rappler’s license to operate is the first of its kind in history – both for the Commission and for Philippine media.”-Editha Z. Caduaya/Newsline.ph