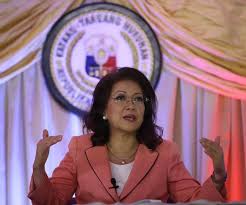 Sereno is the first constitutional officer who was removed from office without an impeachment trial.

The Supreme Court en banc granted the quo warranto petition to remove Sereno from office on the basis of an invalid appointment.

Supreme Court Spokesperson Theodore Te during the me dia briefing said the decision is “immediately executory without need for further action.”

Sereno  was present during the  en banc session.

The high court in a statement said “Accordingly, respondent Maria Lourdes P.A. Sereno is ousted and excluded therefrom…The position of the Chief Justice is declared vacant and the Judicial and Bar Council (JBC) is directed to commence the application and nomination process.”