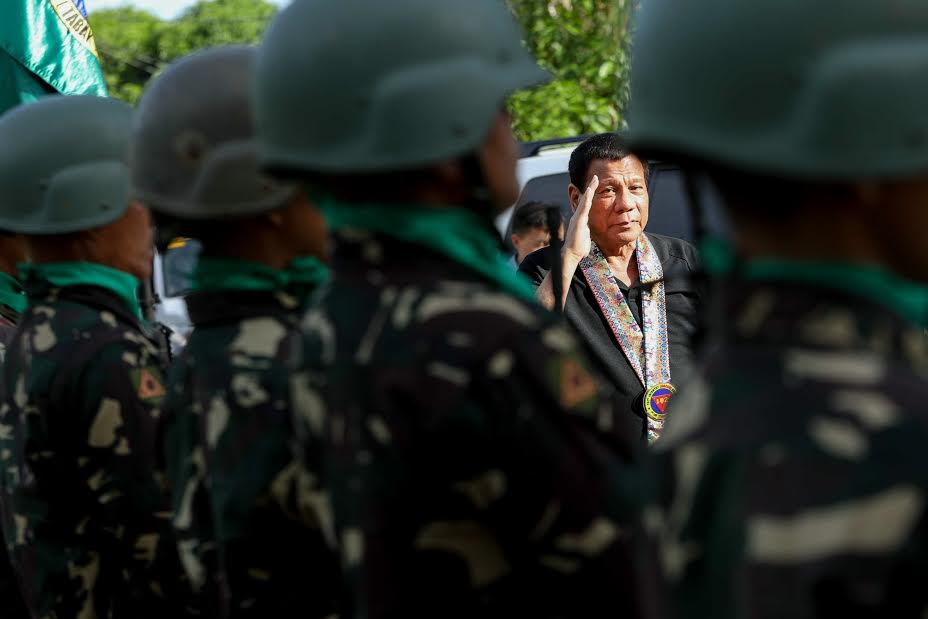 DAVAO CITY (MAy 23) —  President Rodrigo R. Duterte on Tuesday took full responsibility for the shortcomings of the way the Marawi siege was handled last year, saying that the government could have done better.

Today marks the commemoration of the first year,  after ISIS-inspired Maute terrorist group laid siege to the city which led to the death of over 1,000 people.

“We had a very sad experience in the Marawi siege. And we all know that we have fallen short in some respects the way it was handled. I assume full responsibility,” Duterte said in a speech during the 120th anniversary of the Philippine Navy in Pasay City.

Duterte recalled cancelling his schedules in Russia to attend to the pressing problem of Marawi, a year ago.

Here’s the full transcript of Duterte speech about the Marawi siege:

And by the way I also went to Russia and explained to them about my quandary about not having so much firearms or I needed new ones, the accurate ones, ones that had not been… If you can describe it, it’s a battle-weary gun. And I had to get new ones.

And Putin had to come back earlier because my meeting with him was on the next day yet, has yet. But when he knew that I was coming home because it was at that time that Marawi exploded, I had to go home and to declare martial law in another country.

It… Probably, I would say that it leaves a dent in the — in my own history when I go out of government service.

So masakit para sa akin na both Filipinos die. But since I am the Commander-in-Chief, I had to stay with my soldiers and my policemen and I will continue to place a premium.

Ganito kasi ‘yan eh. A lot of complaints have been raised about government people raising howl about the doubling of salaries.

In an ordinary time or even during extreme conditions or extreme danger, we go out with the bureaucracy, we go out of our house expecting to be back at night to join our family.

But these guys, when they are called for an assignment and there’s trouble, even a small pocket battles everywhere, the possibility of not coming home again or getting back to the house in horizontal position is not quite…

And so that is why I really… You know, I’ve been mayor for 23 years. ‘Wag na ho kayong mag-ano nagyabang ako but my father was also governor of Davao province before it is only one.

And I’m quite maybe familiar of the dynamics that goes on and what role has the uniformed personnel had to do on those times. It’s really a matter of life and death.

Maybe, I come — maybe I will not make it with my family. That is the reason why nauna sila because I was way ahead actually. I made that promise as a campaign platform to improve the situation of the police and the military.

And I must admit that until now, we have so many problems involving the police. And we are struggling to correct things. We have — I’ve chosen the best of the disciplinarians and known people who are really very strict in the military ways.

I think that I might return the training itself and the militaristic activity training of the police back to the PNP itself. It has not done good since we transfer it to a public safety, with due respect to General De Leon who was assigned in Davao City before.

He’s very competent but the system is — it ain’t working. And we’re producing, to my mind, some lousy men getting into the service under questionable circumstances.

Nagkulang tayo doon sa background check and even the matter of the protocol of joining the police. Marami diyan mga salbahe na who are really criminals, but who maneuvered somehow to get into the service.

And some of them, sadly, are really into drugs. So may I just remind everybody, including, most of all the policemen because they are aplenty. I’m just warning them that if you are into it, you will be the first to go.

You interpret it in many and whatever suits you would be fine, pero kayo talaga ang uunahin ko. And it is no surprise that you are just also falling down one by one, and the mayors and the barangay captains. It’s a policy of which I cannot renege or even move a little backwards.

Drugs would destroy the nation, period. And the drug war will include the military and the police.

Now if I were to reduce abbreviated oath of office and for all of you, lahat tayo, it simply says our duty mandates us that we must — it’s a mandatory direction — we must protect the people and preserve the nation.

You might not like the way how I correct things but I would just love to warn you that walang atrasan ‘to and I am there in the drug war in front, behind you guys law enforcement and the military people.

And I assure you in front of everybody, that I will not allow a single soldier or policeman whatever be the rank to go to prison just because he was performing his duty. Hindi mangyayari ‘yan. [applause]

In ending his speech about the Marawi issue, Duterte saud ” The Marawi itself was precipitated by the service of a warrant against the Maute relative for drugs. And I’ve been warning the government and people that the rebellion there is being funded by shabu.”-Editha Z. Caduaya/Newsline.ph