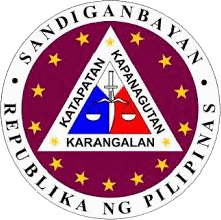 MANILA,  Philippines — The Sandiganbayan  dismissed the motion to quash graft charges against  Caloocan City Mayor Enrico “Recom” Echiverri in connection with the PHP1.9-million drainage system project he implemented in 2011.

In a 15-page resolution written by Associate Justice Sarah Jane Fernandez, the Sandiganbayan Third Division denied Echiverri’s motion due to lack of merit.

Echiverri’s co-accused in the case are then-City Accountant Edna Centeno and City Budget Officer Jesusa Garcia, both of whom are facing additional charges of falsification of public documents.

The graft case arose from a drainage system improvement project along Saplungan Street in Amparo Subdivision which was awarded by Echiverri to Golden 3T Construction (Golden 3T) without the authorization of the Sangguniang Panlungsod.

In his motion, Echiverri argued that there is an existing appropriation ordinance which allows the project to be implemented.

He added that approving the project without authorization from the Sanggunian does not “cause undue injury” to the government.

“There is no casual connection between the alleged lack of specific prior authorization from the Sanggunian and the element of causing undue injury to the government. Moreover, the undue injury must be specified, quantified and proven to the point of moral certainty,” Echiverri’s motion said.

The anti-graft court ruled that Echiverri indeed caused undue injury to the government when he gave unwarranted benefits to Golden 3T.

The Sandiganbayan said that Echiverri still needed to secure an approval from the Sanggunian for the project despite the ordinance.

“Even if there were indeed appropriation ordinances, it was still necessary for the accused to obtain from the Sangguniang Panlungsod an authorization to enter into the contract because the ordinances did not identify the specific projects covered,” the Sandiganbayan resolution said.

The anti-graft court also junked Centeno and Garcia’s motion to quash, saying that it found essential elements in proceeding with the case. (PTR/PNA)