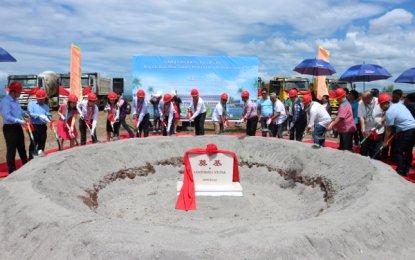 The  construction started 10 months after the Chinese embassy and the Department of Health (DOH) signed a memorandum of understanding for the project’s funding and implementation.

“We made it happen in less than a year. This showcases China, the Philippines and Sarangani’s efforts to speed up this project,” said Jin Yuan, commercial counselor of the Chinese embassy in Manila.

He said the facility is an offshoot of the consensus reached during the talks between Chinese President Xi Jinping and President Rodrigo R. Duterte in the latter’s state visit to China in October 2016.

China sent a technical team to the country in March last year and eventually signed the agreement with the DOH, he said.

Yuan said the these projects were finalized and formally launched during the visit of Chinese Premier Li Keqiang in Manila last November.

The project is a two-storey facility facility will have a floor area of 6,707 square meters and total capacity of 150 beds.

The facility will feature “modernist architectural style,” with its main facade designed “like a window of hope facing the future.” It symbolizes the “opening of each patient’s heart,” with the center “helping them step into a new and bright future.”

The provincial government of Sarangani donated the lot for the center’s site, which is on top of a hill overlooking the Sarangani Bay and just beside the Sarangani Provincial Police Office headquarters.

Yao Shanfa, CSCEC project director, assured that they will comply with the government’s standards and follow the local management mode.

He noted that the design adopted the standards set in the national building code and related laws and regulations, “combined with the Chinese technical standards and design code.”

The company has hired workers from the area and will source some materials locally for the entire duration of the project, he said.

Yuan said they expect the project’s construction to go smoothly and meet its projected completion date or even earlier.

“This due for completion in 21 months. But with our combined efforts, we’re hoping to complete it much earlier,” he said during the project’s formal groundbreaking.

When completed, the facility will be managed by the DOH and will cater patients from parts of Region 12, said Health Undersecretary Roger Tong-an of the Office for Health Service Development.

Also known as Soccsksargen, the region covers the provinces of South Cotabato, Sultan Kudarat, Sarangani and North Cotabato, and the cities of General Santos, Koronadal, Tacurong, Kidapawan and Cotabato.

Tong-an said they will complement the facility with community-based clinics for drug dependents that will be based in the barangays.

He said they will also put up halfway houses for patients that will offer livelihood training programs.

Reynaldo Bungubung, Department of the Interior and Local Government-Region 12 director, said an inter-agency task force will be created to assist the operations of the facility.

He said they will coordinate with local government units to help facilitate the enrollment and accommodation of patients.

Sarangani Gov. Steve Chiongbian Solon lauded the Chinese government, President Duterte and the DOH for choosing the province as site for the project.

He assured the local government’s full support to the construction works and the operationalization of the facility.

“We’re very grateful for this investment and hoping for more projects here in Sarangani in the future,” he added.-Allen Estabillo/PNA