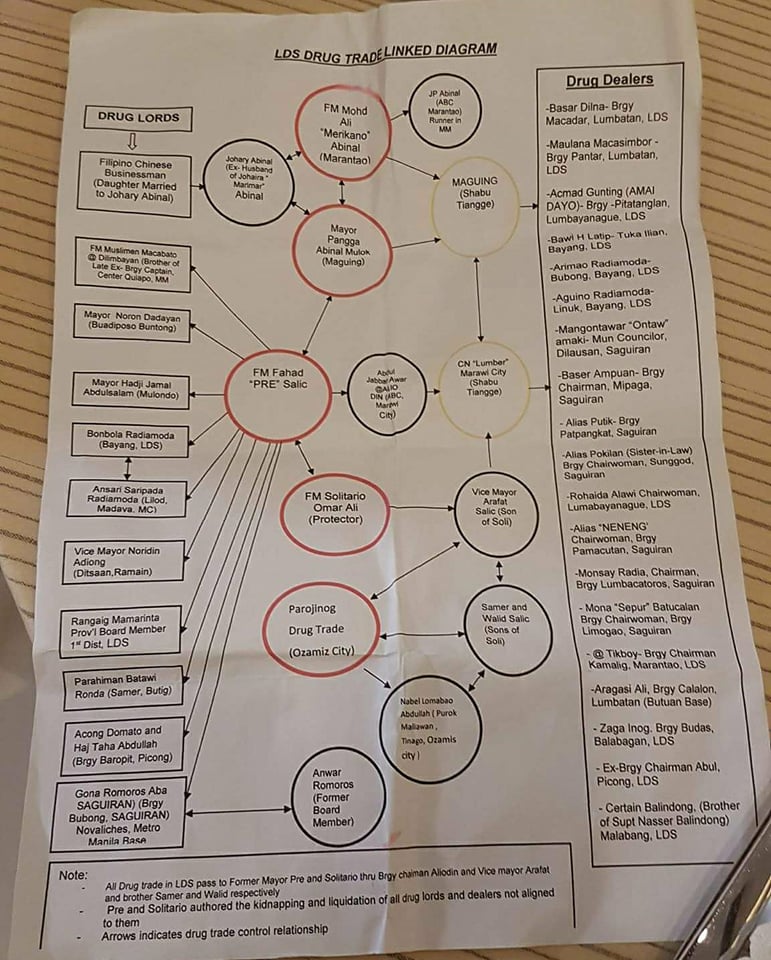 Law enforcement agencies consider the drug list of President Rodrigo Duterte an A-ONE information but for some it is an “EWAN” (don’t know) list.

The list containing 167 names which include members of the judiciary, politicians down to the rank and file police personnel have been ridiculed by critics saying the list is an “Ewan” list.

Lapeña considered the list “vital is has generated from various government enforcement agencies with least political interventions.
Colleagues and family members of those who died cried foul saying their beloved who died several years ago were mention and it has cause shame in their family.

The list included a dead judge, dead police officers, a “lawmaker” when he is not and even named without family names.

In reading the names Duterte claimed the list was “verified, re-validated”.

Lapeña said “the list is valid and legitimately collected and verified from various sources we did not even get in touch with local government units because some of those in the list are politicians.”
Why are the names of dead men include if it was verified and updated?

Lapeña explained “even if they died already the government law enforcement unit holding the names didn’t know of their death that’s why their names still exist, the point is for the public to know that those personalities were included in the drugs list.”

More than notifying the government about the death, the so-called adjudication board of the drugs agency need to prepare the minutes to formally inform agencies that during the deliberations, the board was informed about their death “pending that letter or notification from the adjudication board, we cannot just delete it,” Lapeña explained.

“Yong iba dooon na lumabas na patay na (those who are dead but still listed), the reason is that-they cannot just be taken out of the list without a reason from the unit who submitted the report, ground validation and adjudication are very important to update the watch list,” he explained.

“Once a name is listed in the watch list, it means the person is already in the target list among drug personalities and can ne subjected to anti-drugs operations if necessary, depending on the result of the monitoring being conducted on the ground” Lapeña explained ” .

One cannot just be included in the watch list “there is always validation from the ground it has to be a validated, verified and qualified target list, there is a proper procedure, when you are in the target list you can be subject for mission/operation because it is a reason to affect an operation.”

“Even if they are already dead, if the board does not receive information from the source of information, it cannot be taken from the list,” he added.

But when asked if the source of the information is from the ground, why are they not aware that the subject is already dead?

To this Lapeña said “maybe there was a report but the adjudication board has not yet submitted their information to the agencies which keep the list.”

He also denied reports that the lists a recycled “it is not recycled, we continuously validate the list.

Dela Rosa however, said “we have different source of information, we don’t just accept list because some may iba-ibang ang source-the police is just one of the units and we just do not accept a list.”

“Totoo yan may matagal ng patay pero hindi natanggal ang pangalan dahil hindi na adjudicate (Yes, It’s true some are dead but their names are on the list because the case have yet to be adjudicated),” dela Rosa added.

(It needs partnership with the LGU and the police because if we entrust the listing with the LGU there is a possibility that the report will be politicized, we have experienced that barangay captains gave a list but it did not include people close to them but only their political rivals, those who did not support them during elections).

(Tell the critics to be the police, let’s see what they can do, they always criticize, they have been criticizing for so many years about “don’t know” in government but nothing happened? this administration is new and yet they kept criticizing, go ahead, continue your criticism while we work and work to curve if not to end the drug menace).”-Editha Z. Caduaya/Newsline.ph