UN Peacebuilding Fund: Sustaining the gains of peace and development

Posted on October 7, 2018 by NewsLine Philippines 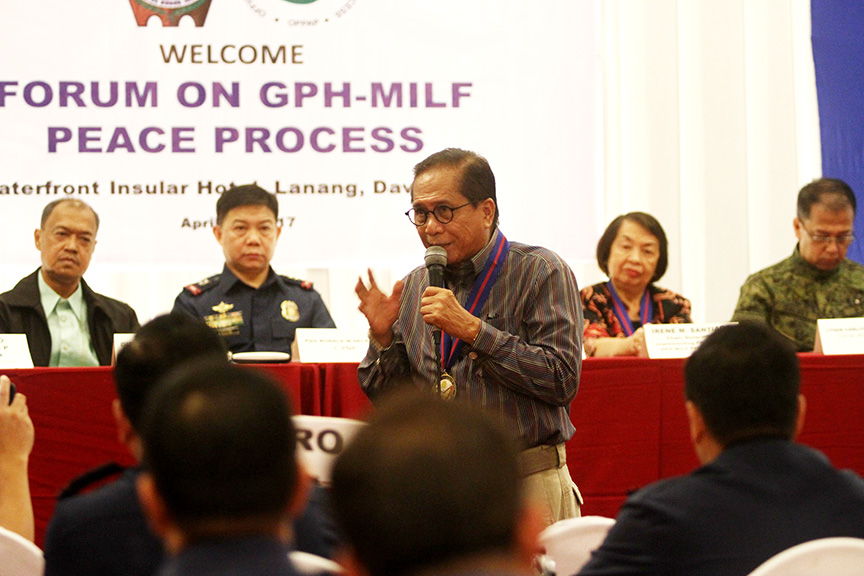 DAVAO CITY (October 7)—The United Nations’ (UN) upcoming initiatives in Mindanao will focus on building the capacities of the youth and women and empowering them to become agents of peace and development.

This was among the highlights of the second Project Advisory Board Meeting of the United Nations Peacebuilding Fund (UN PBF) attended by representatives from the United Nations Development Programme (UNDP), UNICEF, UN Women, and the Office of the Presidential Adviser on the Peace Process (OPAPP) yesterday.

Presidential Peace Adviser Jesus Dureza, who co-chairs the PBF Project Advisory Board with UN Resident Coordinator in the Philippines Ola Almgren, stressed the vital role of the youth in peacebuilding, particularly in the national government’s efforts to address the growing threat of violent extremism in the country.

“The youth is very critical in our work for peace,” Dureza said, pointing out that a large number of those recruited by terrorist groups during the Marawi siege were very young fighters.

He emphasized the need to provide young people, particularly those in conflict-affected areas, with the necessary skills that would enable them to make a living and consequently discourage them from joining extremist organizations.

“We need to give them (youth) the capacity to earn so they can avoid doing these foolish things,” Dureza said.

Sustaining the gains of peace

The PBF, dubbed “Enhancing Capacities for the Bangsamoro,” began its implementation in September 2017 through a partnership between the United Nations and OPAPP.

During meeting, Andrew Morris, chief of UNICEF’s Mindanao office, said it is the overall strategy of his agency to actively engage the youth in peace-promoting activities.

“This is something we would continue in the coming years, to get them involved in peacebuilding,” Morris said.

He said based on a recent study conducted by UNICEF, there are currently around 400,000 out-of-school youth in the ARMM.

Morris said the situation is worrisome in light of the current peace and security conditions in the region which are being exploited by radical groups.

He added that among the major concerns confronting the region’s youth are health, education, and employment.

He said this is the reason the UNICEF’s programs and projects are focused on providing much-needed services for the youth.

“We need to work at a larger scale to make an impact,” he said.

Morris said through UNICEF’s various programs, the agency hopes to reach out to about half a million youth in the region.

For her part, Maricel Aguilar of UN Women reported that her organization has already reached out to 500 “diaspora” communities.

She said this is in line with the agency’s efforts to support a CAB-compliant Bangsamoro Organic Law in particular and the Bangsamoro peace process in general.

Aguilar said many of the women they have talked to still do not have a clear understanding of the BOL, especially on how its implementation will impact their respective communities.

“A lot of them don’t know what will be the implications of the law,” she said. “We need to reach out to these communities and influence them.”

Aguilar said UN Women is now closely working with civil society organizations in the region in order to boost their information dissemination campaign on the BOL and strengthen the role of women in community safety and civilian protection.

To date, they have trained 33 women speakers who will lead in legislative lobbying and conversations in diaspora communities.

“We hope to scale up our interventions,” she said.

Dureza underscored the need for greater synergy and integration among the various peace stakeholders.

“We need to have a coherent network,” he said, noting that a lot of organizations are now helping the national government in its work for peace.

“Thank you very much for your help,” he said. “But there is still a lot of work ahead of us.”

“We are privileged for the partnership that we have,” he said.