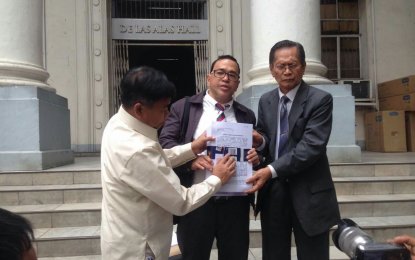 MANILA, Philippines  — The Vanguard of the Philippines, Inc. (VCPI) and Volunteers Against Crime and Corruption (VACC) on Monday filed a criminal complaint before the Department of Justice (DOJ) against former President Benigno Aquino III, two former Cabinet officials and several former and incumbent health officials in connection with controversial anti-dengue vaccine Dengvaxia.

The VACC represented by lawyer Manuelito Luna; VCPI through its president, suspended lawyer Eligio Mallari; and lawyer Nasser Marohomsalic personally filed a complaint for violation Section 3(e) of Republic Act 3019 which prohibits a public officer from giving a private party unwarranted benefits in the discharge of his administrative or judicial functions;Section 65(3) of Republic Act N0. 9184 or the Government Procurement Reform Act (GPRA); and Article 220 (technical malversation) of the Revised Penal Code (RPC); and Article 365 (criminal negligence) of the RPC against Aquino.

Dr. Franciso Cruz, who earlier testified in the Senate inquiry on the controversy, also joined the VACC and VPCI as a co-complainant.

Also named as respondents in the complaint were the officials and employees of pharmaceutical company Zuellig, which supplied the controversial Dengvaxia vaccine and Sanofi Pasteur, which manufactured the vaccine.

The VPCI and VACC claimed that procurement of the Dengvaxia was “irrefutably” fast tracked and may have transgressed pertinent provision of the government procurement law.

A total of 830,000 children and 30,000 more, including members of the Philippine National Police (PNP), received doses of the Dengvaxia vaccine.

“Since correlation between vaccine (Dengvaxia) and deaths had been established prima facie, respondents Aquino III, Abad, Garin “and the other respondents (concerned DOH officials, past and present) should stand trial for criminal negligence under Article 365 of the RPC (Revised Penal Code)… The respondents should be charged with multiple homicide and physical injuries through criminal negligence,” read the 17-page complaint.

Moreover, the complainants pointed out that the purchase of the Dengvaxia vaccine was approved by Aquino and Abad even if the program had no allocation in the 2016 national budget.

“They should be held to account for the natural and probable consequences of their acts… Irrefutably, some deaths and dengue shocks are linked to Dengvaxia,” the complaint read.

“Doubtless, the respondents had violated (the antigraft law) by causing undue injury to any party, including the government. For which, they should (be) held to account,” the group argued.

“Undeniably, (they) had caused the procurement of millions of doses of the Dengvaxia vaccine… even if the same has no appropriation cover and does not belong to the same allotment class… In the process, they used innocent children as ‘guinea pigs,’” they added.

The groups also said they filed the complaint based on the testimonies of the resources persons invited to shed light on the issue by the House Committee on Health and the Senate Committee on Accountability of Public Officers and Investigation (Blue Ribbon) joint with other concerned committees which substantiated their claim that the respondents were “directly and proximately” responsible for the Dengvaxia vaccine mess.

Sought for a comment, Garin said that she is ready to face any charges.

“I welcome the case. We are ready to face any of the charges because my conscience is clear. It’s better to transfer the venue of the debate in court and stop the hysteria being generated by misleading questions and conclusions. Public health has been threatened and our people do not deserve this. The proper forum can delineate facts, scrutinize experts and allow the truth to prevail,” Garin said.

For his part, Abad said that he still not seen the complaint but if the issues relate to procurement and proper observance of accounting and budgetary rules, he is “confident that insofar as the role played by the DBM, everything was above board and according to rules and laws.”

According to Dengvaxia manufacturer Sanofi Pasteur, the dengue vaccine should only be administered to children who already contracted dengue aged nine years old and above.

The DOH suspended the vaccination program in December 2017 after Sanofi Pasteur said Dengvaxia poses risks to those without prior infection.

At present, government authorities are investigating the death of 14 children who had been immunized with Dengvaxia.