Posted on January 2, 2018 by NewsLine Philippines 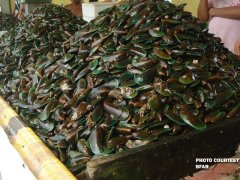 TACLOBAN CITY, Philippines  — Shellfish ban is still up in eight bays in Eastern Visayas as red tide toxins continue to plague some coastal waters of the region since mid-2017.

Based on samples collected by the fisheries bureau, red tide toxins are still present in both seawater and shellfish meat – above the regulatory limit – said Nancy Dayap, manager of BFAR regional fisheries laboratory in a mobile phone interview Tuesday.

Leyte, Leyte was the latest town added to the list after the BFAR main office included the area for shellfish ban on Dec. 28, 2017.

“We issued a local warning early of December because we already noticed high pyrodinium counts in the waters of Leyte, Leyte. Immediately, we sent shellfish samples to BFAR central office for confirmatory test. The toxin in the shellfish meat was already very high at 255 micrograms per 100 grams meat,” Dayap told Philippine News Agency (PNA).

Pyrodinium bahamense is the organism responsible for the red tide toxin.

The maximum regulatory limit of toxin is 60 micrograms for every 100 grams of shellfsh meat. Above that, the government strictly prohibits shellfish harvesting in affected areas.

The recent spate of red tide phenomenon in the region has started in July 2017 and gradually expanded to nearby bays. The toxin has killed a boy in Catbalogan City in Samar while 45 others fell ill in the same province after eating green mussel.

The fisheries bureau had set up checkpoints in San Juanico Bridge to prevent entry of shellfish gathered in affected bays.

Local government units are advised to regulate gathering, marketing and transporting of shellfish in infested areas.

Fish, squid, shrimp and crab are safe to eat “provided that they are fresh and washed thoroughly and internal organs such as gills and intestines are removed before cooking,” BFAR said.

Red tide is a term used to describe a phenomenon where the water is discolored by high algal biomass or the concentration of algae.

The discoloration may not necessarily be red in color, but it may also appear yellow, brown, green, blue or milky, depending on the organisms involved. –PNA