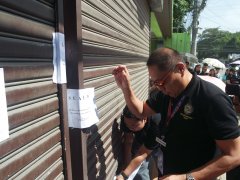 DAVAO CITY, Philippines —  The Bureau of Internal Revenue (BIR) 11 padlocked  a known coffee shop in Davao City for alleged failure to declare revenue of its operation.

Under its Oplan Kandado, BIR 11 director Nuzar Balatero padlocked Café Demitasse on F. Torres Street after serving the closure order at around 9 a.m. Tuesday to the management.

Revamonte said that in the first two quarters of its business in 2017, the coffee shop should register as VAT payer and not as non-VAT since it had more than P1.9 million sales income during that period.

“Actually, they (owners) are supposed to pay VAT due of P2.2 million but, they pay their taxes by way of percentage tax amounting to P43,000 plus, ” he said.

He also said the establishment has a total assessed VAT liiability of P3.5 million for the two quarters.

Revamonte said his office made personal communications to the owner, lawyer and accountant of the coffee shop to remind their tax obligation.

“Sufficient notices were given to them as provided by the law,” he said.

He said despite of the underdeclaration, the BIR would not file charges against the establishment because closure wad already enough punishment.

Revamonte said the establishment was supposed to be closed last year but the closure order was only approved by BIR Commissioner Caesar Dulay last week.

“It took us some time before we released the order because of internal matters,” he said. -Armando Fenequito Jr./PNA