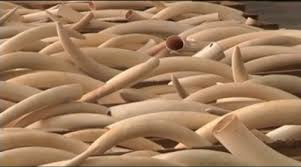 On Sunday, the department seized 23 ivory tusks weighing 75.74 kg., with an estimated value of 275,542 ringgit (USD64,266) at a warehouse of the Kuala Lumpur International Airport, the Malaysian customs department’s assistant director general, Mohd. Pudzi Bin Man, said in a statement.

On the same day, authorities also busted pangolin scales weighing some 300 kg., valued at about 3.86 million ringgit (USD0.9 million), at an airport warehouse.