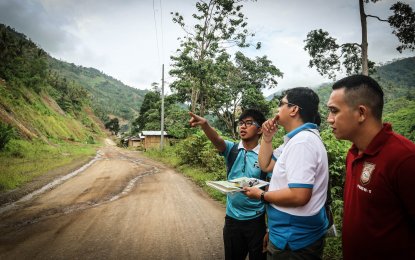 There are fault lines found in Mati City and in the municipality of Lupon.

The fault lines cut across portions of barangays Marayag, Calapagan, and Don Marcelino in Lupon and in the villages of Taguibo, Sainz and Central in Mati.

The experts found out, that the fault in Davao Oriental approximately 30 kilometers long is connected to the Philippine Fault.

Of the country’s 1,200 kilometer fault line, 320 kilometers can be found in Eastern Mindanao, stretching from Surigao province to Mati Davao Oriental

The Phivolcs team placed markers in the identified areas which will serve as the guide for local leaders to educate and inform their constituents about the safety preparations during disaster specially earthquake.

However, no fault line was detected near the center of Mati but residents must take precautionary measures during earthquakes.

Deloso said, Governor Nelson Dayanghirang requested the mapping as part of the preemptive measures of the provincial government of which the province will draw its geo-hazard map.

Areas identified with fault lines are considered danger zones and classified as no-build zone. Structures in these areas should be built five meters away from the center.

Experts explained the Philippine Fault Zone divides the country from Luzon to Southern Mindanao with its tail end located in Mati, Davao Oriental. It is in the path of the Ring of Fire, a 40,000-km horseshoe-shaped continuous area in the basin of the Pacific Ocean where a large number of earthquakes and volcanic eruptions occur.-PNA