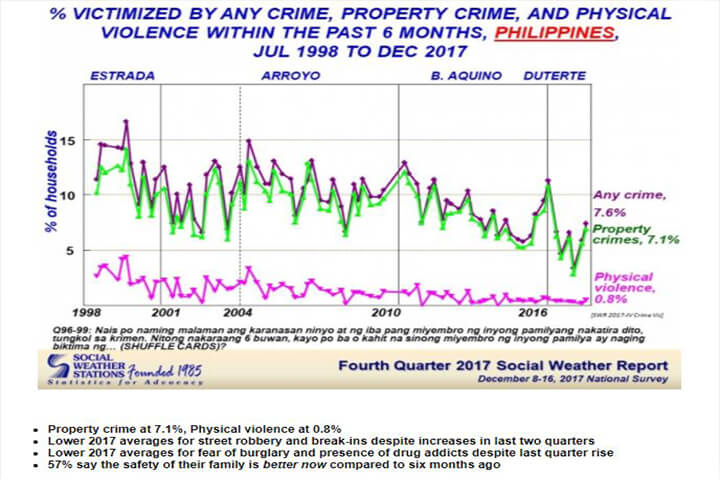 MANILA, Philippines —  Common crimes have hit a record low of an average 5.6 percent last year, according to a report released by independent pollster Social Weather Stations (SWS) on Thursday.

Based on its December 8-16 poll last year, the SWS found that 7.1 percent of families experienced common crimes, such as losing property to street robbery, burglars, and carnappers within the past six months.

Those victimized by physical violence, meanwhile, had an average of 0.7 percent last year, lower than the 0.8 percent annual average in 2016.

The latest SWS poll showed that 7.6 percent of the Philippine population or roughly 1.7 million families reported having been victimized by any of the common crimes in the last quarter of 2017. But the annual average hit a record low of 6.1 percent, even lower than the 8.2 annual average for 2016.

Complaints from families victimized by street robbery ended with a record-low annual average of 4.2 percent, owing to an only 2.3 percent rate in June 2017.

The latest survey of the polling body showed lower 2017 averages for street robbery and break-ins despite increases in the previous two quarters.

It also registered lower averages for the people’s fear of burglary and presence of drug addicts.