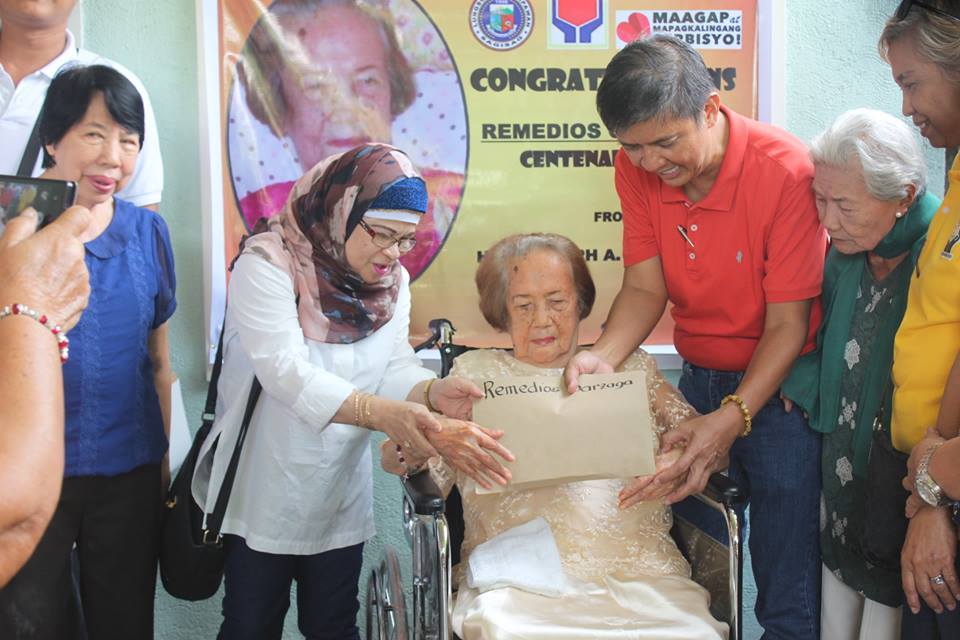 DAVAO CITY, Philippines — Four centenarians of Kidapawan City were given honors in a simple ceremony led by the The Office of Senior Citizen Affairs (OSCA).

City Mayor Joseph Evangelista honored the centenarians and other senior citizens  on October 2, 2017.

The honorees were given P1000,000 each as prescribed by law.

On September 2016 President Rodrigo Duterte  led the signing of the Implementing Rules and Regulations (IRR) of Republic Act (RA) No. 10868 or the Centenarians Act of 2016, a legislation that grants additional benefits and privileges to Filipino centenarians.

The Act is a tribute to Filipino centenarians who have spent their lifetime in contributing to nation building.

Under RA No. 10868, all Filipinos who have reached 100 years old and above, whether residing in the Philippines or abroad, shall be presented a letter of felicitation from the President, congratulating them for his or her longevity.The said law also provides that a centenarian gift amounting to P100,000 be given to them.

In Kidapawan City, four have been given the honor and benefits.

The activity was one of the highlights of the Filipino Elderly Week with the theme “Pagkilala sa Kakayahan Ambag at Paglahok ng Nakatatanda sa Lipunan.”

Among those honored was Cenon Ordona was the oldest at 105 years old.

Ordona was born on April 12, 1912. He is currently residing with his children and grandchildren in Barangay Poblacion, Kidapawan City.

Another centenarian, Teofilo Cayme, is 101 years old, also of same village. At 102 years old, Remedios Barzaga, born on January 17, 1917, has still vivid memories of her life on earth.

Also recipient of recognition and financial assistance from the local government was Faustina Costelo, 102, having been born on February 1915.-Editha Z. Caduaya/Newsline.ph