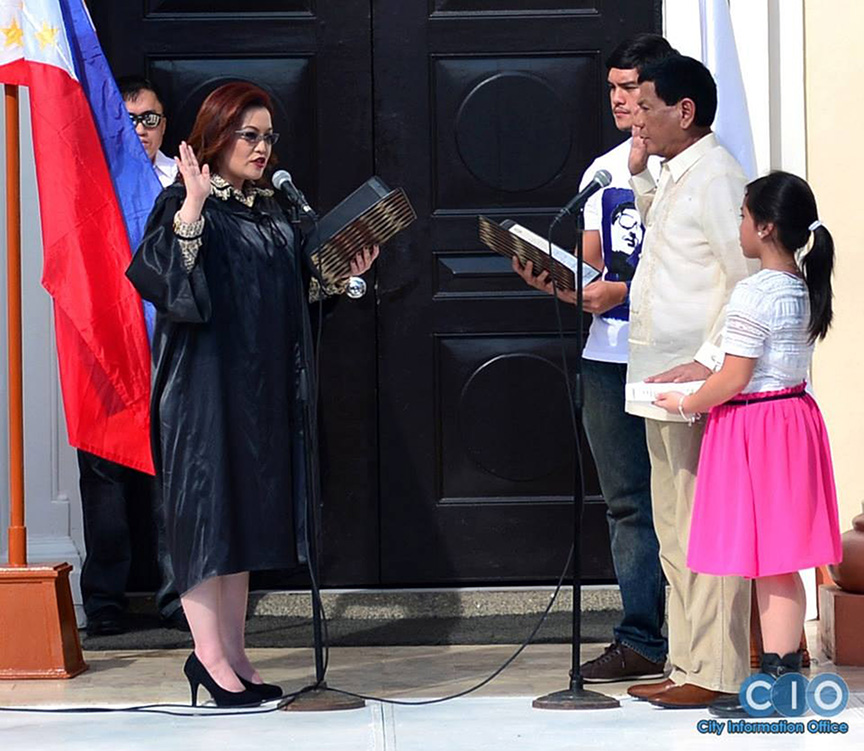 DAVAO CITY- THE lady judge who administered the oath of then Davao Mayor Rodrigo Duterte in 2013, is the first judge the President appointed from the Davao region.

Judge Jill Rose S. Jaugan-Lo, who graduated from the Ateneo de Davao law school started her journey in the judiciary after passing the bar examinations in 2001.

Her first job was being the attorney IV at the Commission on Human Rights XI from 2002 to 2006.

But mid 2009 she was appointed as Municipal Circuit Court (4) Judge.

On August 18, 2016, Lo needs to vacate her Sala at MTCC 4 as the President signed her appointment as the RTC Branch 14.

“I guess, I was among the first few people who applied for a position after President Duterte was elected,” she narrated.

Her first meeting with Duterte was on June 30, 2013, the day she administered Duterte’s oath as the City Mayor.

They were strangers to each other until the oath taking “I first met him the day I administered his oath on June 30, 2013,” Lo revealed.

She recalled, two days before the oath taking, she received a call from Christopher Lawrence “Bong Go” Go, Duterte’s trusted aide, informing her that she has been requested to administer the oath of the City Mayor.

“I was surprised but I couldn’t ask why me? later that day, my husband Andy who is a friend of Bong Go told me the Mayor was looking for a lady judge to administer his oath,” she added.

The day she took her oath as TRC Judge at Malacanang Lo, even wondered “I don’t know if the President still recognized me, because there were many of us who took part in taking our oath before him.”

Lo, attributed her appointment to her own track record “I was not involve in any controversy or malicious issues, I just work as a public servant.”

Though she admitted, “If I have the chance, I will personally thank the President for being the first judge to get appointed from Davao region, Salamat Mayor!”

Lo is the daughter of Atty. and Mrs. Constancio A. Jaugan, she is married to Atty. Anderson Lo, the couple is blessed with three children Adrian, Aidan Joaquin and Alec Davic. -Editha Z. Caduaya