Posted on November 26, 2016 by NewsLine Philippines 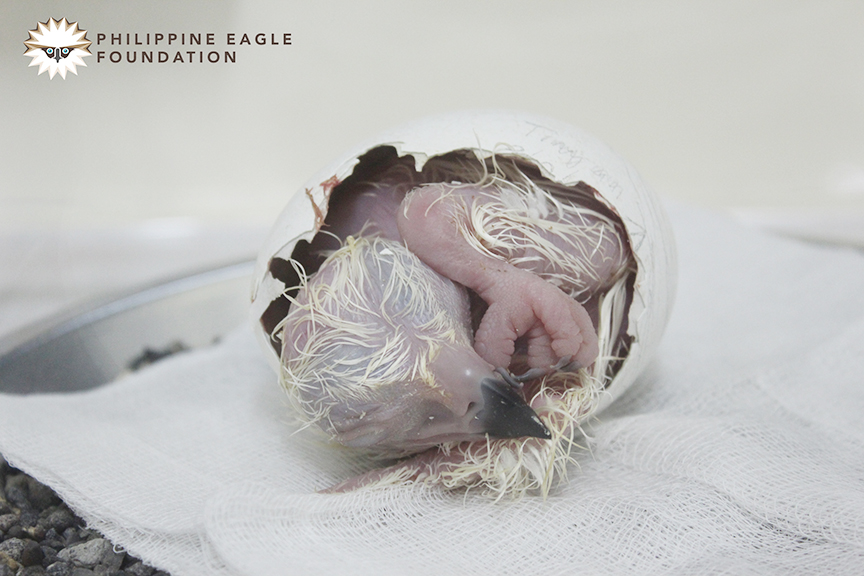 The Philippine Eagle Foundation (PEF) is proud to announce the birth of the 28th eaglet from the PEF conservation breeding program.

The eaglet has hatched, with minimal assistance, on November 4, 2016 after 56 days of incubation. It is 4 to 5inches tall and weighs 488.3g as of this writing.

The new chick is the third successfully hatched offspring of the Philippine Eagle pair, MVP (male) and Go Phoenix (female), after Sinag and Chick 27. Eagles MVP and Go Phoenix are the adopted eagles of PLDT and Edisy Trading respectively.

“The chick showed no signs of deformities. It is active, and in fact, has a big appetite,” PEF Animal Keeper Colin Santander, said.

“It is just three weeks old but its growth is exceptional,” Santander added.

The birth of Chick 28 highlights the continuing success of what was once thought as a lost cause.

“In the midst of continued mortality and persecution in the wild, this hatching success underscores the importance of conservation breeding as a way of securing this species’ gene pool,” said PEF Executive Director Dennis Salvador.

DENR-Biodiversity Management Bureau (BMB) chief Theresa Mundita Lim, also expressed her happiness and extends her congratulations to the PEF for the successful hatching of Chick 28.

The Philippine Eagle Foundation continues to serve its mission in saving the great Philippine Eagle from extinction. The PEF firmly believes that, with concerted effort, the critically endangered Philippine Eagle will someday fly freely in the wild. (Amira Marione Madrazo / PEF)