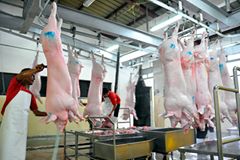 Davao City’s slaughterhouse has been certified as a Class AA facility by the National Meat Inspection Services of the Department of Agriculture, an official said.

Dr. Cerelyn Pinili, head of the City Veterinarians Office, said the classification, which was released on November 24, qualifies all meat processed from the abattoir located in Maa to be sold in other provinces or even in Metro Manila.

The accreditation was given after the facility passed all the requirements laid down to ensure that meat products are safe for commerce and consumption. The facility was noted for its clean and efficient operations, with less human-to-meat contact.

The multimillion slaughterhouse is being operated by the Livestock Dealers Cooperative (BLDC) as part of the city government’s Private-Public Partnership with the private sector.

“The accreditation is a big boost to the meat producers of the city,” said Dr. Pinili. “This is a big opportunity for our livestock producers and dealers because it means they can now expand their market.”

The facility has the capacity to process around 500 hogs, 10 large cattle, and 20 goats daily.

Pinili’s office regularly conducts inspections before and after animals are slaughtered to make sure the quality of the meat produced and sold to the market.

Meat producers in Davao are now eyeing to sell their products to Palawan, Cebu and other major cities and provinces. CIO