Posted on March 14, 2017 by NewsLine Philippines 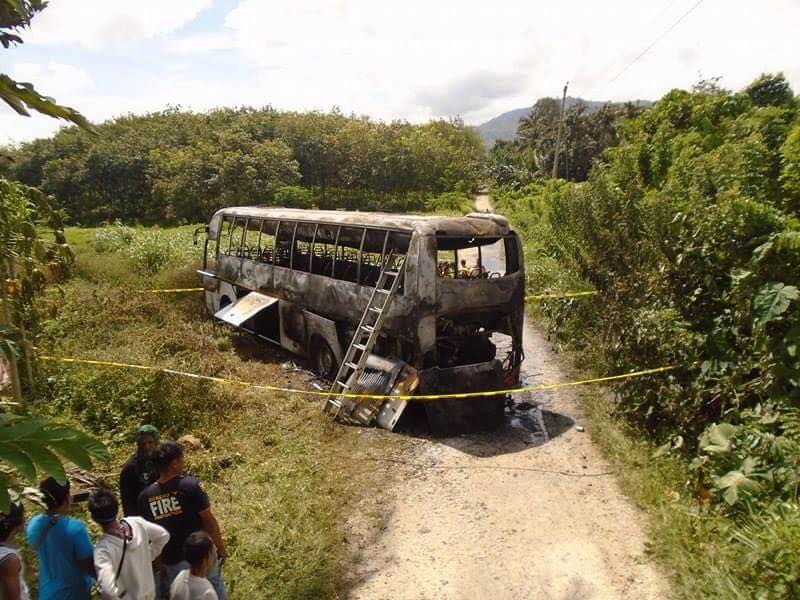 The incident happened just in time when the government and the Communist party of the Philippines/National Democratic Front (CPP/NDF/NPA)  announced the resumption of the peace talks.

Barangay Bagong Silang is just 3 kilometers away from the Makilala bus terminal.

The bus was en route to Davao when the armed men asked the drive to stop the bus and ordered the passengers  to disembark.

Aceh Villarin and her 3-year-old daughter were among the estimated 50 passengers of the bus, which is owned by Yellow Bus Lines.

(While the bus was running, 5 armed men stood up, one of them shouted, everyone disembark, do not be scared, do not be afraid, Do not worry, we just want the bus.)

“We were scared but they told us to disembark so we followed the order,” she said in the local dialect.

“It is very unfortunate this incident happened when we just learned that the talks between the CPP [Communist Party of the Philippines] and the GRP [Government of the Republic of the Philippines] is about to resume,” Makilala Municipal Mayor Rudy S. Caoagdan quipped.

“It is very unfortunate. I cannot feel the sincerity,” Caoagdan said.

Victor Serondo, the bus driver, said six rebels boarded the bus and introduced themselves as members of the NPA, and directed him to drive towards Sitio Bagong Silang in Barangay San Vicente.

Ceasefire not yet effective

Secretary Jesus Dureza of the Office of the Presidential Adviser for Peace process (OPAPP)  who is still in Amsterdam   in a statement said “I am still here in Amsterdam and en route home after signing a joint statement with the leadership of the CPP/NPA/NDF and I am already getting disturbing reports of alleged atrocities by the NPAs like the recent burning of a bus in Makilala, North Cotabato.”

Dureza explained:”‘ 1. The restoration of unilateral ceasefire that has been announced is NOT yet effective as of today as there is still a need to allow the government and the communist leaders to inform their respective ground forces accordingly. Except for the government forces where there is a tight command and control structure in place and directives from higher headquarters are downloaded expeditiously, the same is NOT true with the NPAs, for obvious reasons.

Hence, the effectivity date shall commence as soon as both sides agree to a date specific ( which should be anytime before the first week of April, 2017 , the agreed date for the fourth round of peace talks as contained in the Utrecht Joint Statement. The date specific will be accordingly announced.

He added “such incidents affect the over-all sentiments of peace- loving citizens who may even raise issues of good faith and may lead to questions as to whether or not rebel groups we are engaging in the peace tables are sincere or have control over their ground forces. Public acceptance ( or the lack of it) on the on- going peace process is critical, given the indispensable need of over-all stakeholders’ support to ensure success of our peace efforts.”

The passengers were freed unharmed.