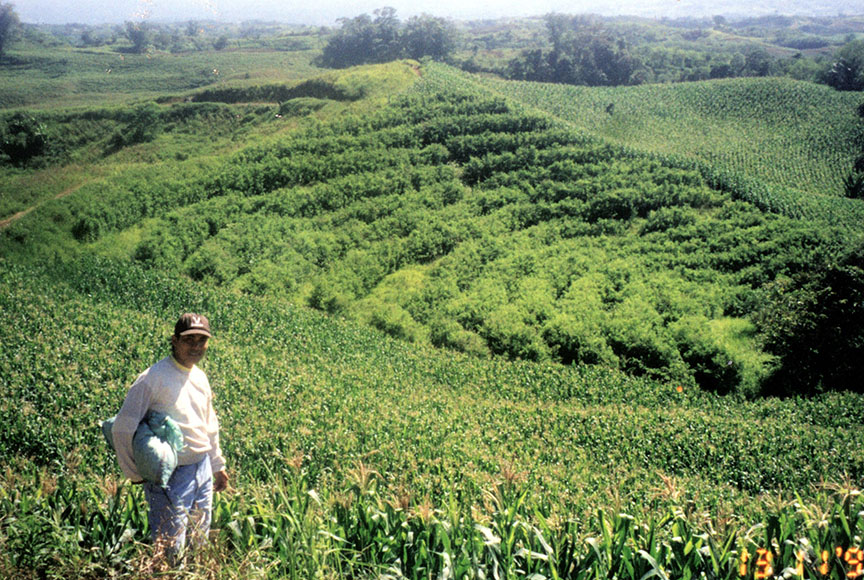 Watson recalled that in one area, corn production had dropped from 3.5 tons per hectare to about only half a ton per hectare in a span of ten years. Other crop yields had also dropped 60%-80% during the same period.

An agriculturist by profession, Watson did his own investigation of the situation in the area. He came to conclusion that the main culprit for these low yields was the depletion of soil and nutrients through erosion.

“Soil erosion is an enemy to any nation – far worse than any outside enemy coming into a country a conquering it because it is an enemy you cannot see vividly,” said Watson, who received the prestigious Ramon Magsaysay Award in 1985 for international understanding. “It’s a slow creeping enemy that soon possesses the land.”

As form of land degradation, soil erosion is the most serious type, according to Dieldre S. Harder, a researcher with the Economy and Environment Program for Southeast Asia (EEPSEA). “(Soil erosion) affects 63% to 76% of the country’s total land area, particularly in the upland regions,” she pointed out.

“Around 74% of sloping upland area is cultivated for subsistence farming, which has implications on food security,” wrote Harder in her paper which was part of the cross-country research project, “Sustainable Land Management: Adoption and Implementation Constraints.”

Lester R. Brown and Edward C. Wolf, authors of Soil Erosion: Quiet Crisis in the World Economy, said the immediate effects of soil erosion may be economic but in the long run, its ultimate effects are social.

A.M. Van Oosten and E.J. Cahill, the men behind Towards Integrated Soil Conservation, wrote in 1986 that “it is more practical and economical to use management practices that minimize soil erosion rather than to allow erosion to reach the stage where restoration of eroded soil is necessary. It is essential that the productivity of these resources be maintained, especially where there is great population pressure on land resource.”

The EEPSE study, in cooperation with the Economics of Land Degradation (ELD) Initiative, has identified three sustainable land management (SLM) practices in the Philippines: agroforestry, organic agriculture and contour farming.

One of the most noted contour farming systems was the Sloping Agricultural Land Technology (SALT) which MBRLC has developed.

When a hedge is 1.5 to two meters tall, it is cut back to a height of 40 centimeters and the cuttings are placed in the strips between the alleys to serve as organic fertilizer (green manure).

Despite the advantages of contour farming initiatives in the country, most farmers are still not adopting the system.

EEPSEA Director, Herminia A. Francisco, cited six constraints in the adoption of contour farming among Filipino farmers. These are:

· Technical difficulty. This is particularly true in the case of A-frame, the most popular instrument used for contour farming. “The common technical difficulty met by farmers in implementing is in the delineation of contour lines,” Francisco wrote.

· Low availability of planting materials. Most of those used for hedgerows are readily not available: Flemingia macrophylla, Desmodium rensonii, Indigofera anil, and Leucaena leucocephala. Aside from difficult to secure, they are also expensive.

· High labor requirement. Contour hedgerows are to be trimmed regularly to avoid shading the crops planted along the alleys. Past studies showed that the labor required to do this is more than 30 persons-days per year.

· Crop area reduction. “Following the recommended one meter vertical distance of contour lines, the area lost for crop production due to contour barriers is around 20%-30% of the total land area,” Francisco noted.

· No additional income. Farmers complain that they don’t get additional income for maintaining contour hedgerows. Non-monetary benefits like soil control and increased soil fertility has no value to them.

· Pest and disease host. There are reports that the vegetative contour barriers play host to some pests and diseases.

There are several other factors. For instance, “subsistence corn farmers and those with higher off-farm income are less likely to adopt contour farming since hedgerows usually compete for labor from other non-farm activities,” Francisco noted.

Another factor: “Lack of access to markets prevents farmers from doing contour arming due to lack of knowledge on sustainable land management.”

As such, Francisco suggested that a strong group be established among farmers to encourage adoption. With a group, farmers can have access for information on sustainable land management practices.

Soil erosion is just one of the many aspects of land degradation. “Land degradation is also occurring in terms of reduced vegetative cover and loss of habitats, soil pollution, and water quality and quantity deterioration,” said EEPSEA in a statement.