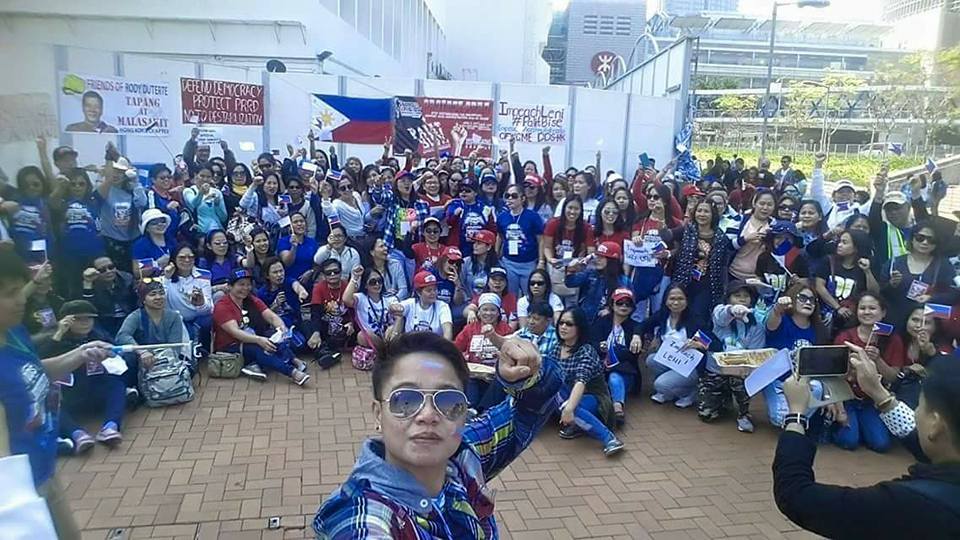 DAVAO CITY, Philippines (April 4)–Thousands of loyal followers and supporters of President Rodrigo Duterte occupied public places in the different parts of the world Sunday, April 2 to show their support.

They asked his critics and the opposition to stop shaming the president in the international community.

The supporters were up in arms to protect the president who vowed to an endless campaign against illegal drugs and end corruption in government.

This, after Vice President Leonora Robredo called on the international community to intervene and help stop the drugs war saying only the poor subjected to the drugs war.
Since Duterte assumed office in June 30, 2016, the police has intensified the campaign against drugs.

Two Mayors, a handful of businessman, police and local politicians who were suspected to have been involved in the illegal drugs have been killed.

Duterte described the drugs problem in the country as a pandemic, a very serious threat to the country.

He even ordered the police to kill drug lords and pushers should they offer resistance during the arrest.

The country has so far established at least three drug rehabilitation center for drug dependents who wants to undergo medical treatment for free.

But Duterte’s political rivals and critics capitalized the campaign to oust the president, a thing which drew the ire of his supporters.

Duterte supporters felt the opposition is shaming the president by hurling various accusations from his war against drugs to his personal details.

Thousands of loyal Duterte supporters gathered in Luneta raising their fist as they vow to protect Duterte all the way.

The event was highlighted with the presence of various artists, singers and personalities supporting the president.

Singer/songwriter Jimmy Bondoc said the government did not spend any single centavo as Duterte supporters helped them for the event.

Bondoc emphasized the opposition should stop shaming the president and instead help in rebuilding the nation.”

The supporters want Duterte critics not to shame the president as they believe he is doing the best service he can to the country and its people.

The same activity also themes “Palit Bise” or Change the Vice President as the supporters lambasted Robredo for calling the international community to investigate Duterte and the killings involving suspected drug pushers.

They also called for Robredo’s the impeachment since she has become the face of the opposition.
Rally participants displayed banners and placards depicting Robredo with horns or as the mythological Medusa, and branding her as a traitor.

Toto Balinghasay, a Duterte supporter said “Du30 has waged and had won not the battle but the resilience of our fellow countryman to and by our President when the need arise, from Tyrants who will push our nation down just to enslave the youth of our nation.”

Duterte’s aspiration for the country and “His heart warming desire keeps the flame burning for our desire to be free from political bondage… To God be the glory. And lastly, LET US ALL PRAY HARD THAT WE WILL SEE THE DAWN OF NEW MILLENIALS .OFWS CoMING HOME TO THEIR FAMILIES.FROM THE SAVAGE AVERY.”

Ummo Lye Nuska says he knows Duterte is doing the great job fo rthe nation. ” ALHAMDULILLAH because PDu30 won the presidency. he is the only President who really manifest the desire of eradicating the drug problem in teh country with 101percent sincerity, drugs problem now are lessened and getting lesser that only liars and hypocrites disagree.”

Believing that Duterte is a good leader who works for the welfare of the Filipinos, Rodolfo “Rhudee” Castillo, one of the leaders of Duterte Die hard Supporters (DDS) Hongkong chapter said Overseas Filipino Workers will never allow Duterte critics and the opposition to malign the President.

“We know, down the President’s heart is to help the Filipinos. we feel it, they should not shame our president, they are sourgraping, they are losers, the war on drugs is helping us because we don’t want our families to be hooked in drugs while we are away.”

Evangeline Villarta said “the world should know, the president enjoys massive support from OFW’s who trust and believes in him.

Germany
In the Facebook page of the OFW global, the group claimed the event in Frankfurt Germany was held peacefully.