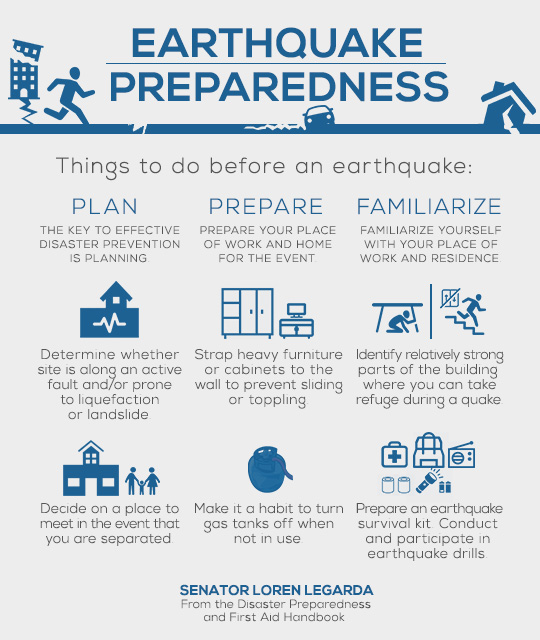 “We never know when an earthquake will occur. But we should know what to do before, during and after the occurrence of such events. Regular safety drills should be done to familiarize citizens with safety and disaster preparedness measures.”

At least two earthquakes with magnitude 5.6 and 6.0 jolted Batangas and were felt in nearby areas including Metro Manila last Saturday, only four days after a 5.5 earthquake also hit the province. These tremors have caused damages to structures.

Some portions of Davao provinces also felt some earthquakes this week.

“The key to effective disaster prevention is planning,” Legarda said in a press statement. “It is important to know if our location is near an active fault and prone to liquefaction or landslide, which may cause damage to houses or buildings. We have to ensure that buildings are not standing on active faults. Evaluation and retrofitting of public and private infrastructure is crucial in ensuring that buildings, bridges and other similar structures can withstand strong quakes.”

According to Legarda, earthquakes turn into major disasters due to unsafe structures – poorly built structures, buildings in inappropriate places, inadequate design and materials specification, and shortcuts in construction.

“The additional expense required for making structures safe from earthquakes is worth it especially if it would save thousands of lives,” she added.

Legarda urged local government units and barangay officials to “prepare their communities especially by determining open spaces for safe refuge when earthquakes occur and crafting evacuation plans that would help citizens find out the fastest and safest way to reach open spaces and other safe areas.”

According to the Grolier Encyclopedia, about 6,000 earthquakes are detected throughout the world each year. Of this, 5,500 are either too small or too far from populated areas to be felt directly. Another 450 are felt but cause no damage while 35 cause only minor damage. The remaining 15, however, can exact great toll sin death and suffering, besides heavily damaging houses, buildings, and other structures.

An earthquake (also known as a quake, tremor or temblor), according to a monograph circulated by the Philvocs, “is feeble shaking to violent trembling of the ground produced by the sudden displacement of rocks or rock materials below the earth’s surface.”

The earth has an outermost shell, about 80-kilometer thick, which is solid and rigid. This shell is called lithosphere, which is subdivided into small and large pieces with some pieces large enough to contain continents. These pieces of lithosphere are called tectonic plates.

So-called faults are breaks or zones of weaknesses in rocks akong which displacements had occurred or can occur again. They may extend for hundreds of kilometers downward, even down to the base of the lithosphere. Faults showing signs or documented history of recent displacements are called active faults.

According to Philvocs, at least 5 earthquakes per day occur in the Philippines. For almost four decades now, the country had been affected by 10 earthquakes with magnitude greater than 7.0. As such, the possibility of these destructive earthquakes occurring again in the future “is very strong.”

The destructive effects of earthquakes are due mainly to intense ground shaking or vibration. “Because of severe ground shaking, low and tall buildings, towers and posts may tilt, split, topple or collapse, foundation of roads, railroad tracks and bridges may break, water pipes and other utility installations may get dislocated, dams and similar structures may break and cause flooding, and other forms of mass movement may be generated,” Philvocs explains.

Many strong earthquakes originate along faults that break the earth’s rigid crust. Called ground rupture, it is a deformation on the ground that marks the intersection of the fault plane with the earth’s surface.

Landslides, the downward movement of slope materials either slowly or quickly, are most likely to happen. Hilly and mountainous areas, escarpments, and steep river banks, sea cliffs and other steep slopes are prone to landslides.

“The only way to avoid disasters caused by earthquakes is to prepare for them,” wrote Maria Elena Paterno in her book Earthquake! This must be the reason why Philvocs urged every Filipinos to evaluate the structural soundness of home, office and buildings they frequent. “Determine the safest areas both inside and outside,” said the Philvolcs primer.

The primer also recommends that every home must be prepared for the eventuality. “Secure heavy furniture to prevent sliding or toppling over by affixing them to walls or floors with brackets or tying to grillwork. Keep heavy objects on lowest shelves. Check hanging objects (like ceiling fans, mirrors, heavy picture frames). Affix bolts or hooks on cabinet doors especially those in the kitchen to prevent them from flying open and allowing breakable items to spill out. Keep only very necessary chemicals and flammable liquids in unbreakable containers. Store them on low shelves.”

The Philvocs primer also suggests setting up an earthquake readiness plan at home. “Make sure your children, elderly members and house helpers are properly instructed on what to do. Practice drills with them. Familiarize yourself with First Aid procedures. Keep a manual handy in case you forget. Make sure everyone knows the locations of and how to switch off the electrical and water mains. At home (and at work), master the quickest, safest way out,” it says.

The primer also recommends preparing a small bag – no more than 5-6 kilograms – for each member of the family. Among those that should be packed inside the bag are two changes of clothes, a blanket, a towel, basic toiletries, sturdy shoes, flashlight, batteries, a bottle of water, biscuits candy, a small radio, any medications for chronic ailment suffers, first aid kit, contact phone numbers and addresses. Important papers (passport, recent medical records, bank books, insurance papers, etc.) must also be included.

What should a family do during an earthquake? The primer says: “Stay calm. Call out instructions to children or others who seem to be in panic.”

If you happen to be inside a building that is structurally sound during an earthquake, you must stay there. However, if you have doubts about the building, leave immediately by the safest, quickest route.

Once you are outside the building, look for an open area where you can stay. But you must stay away from power lines, telephone poles, and trees. If objects are falling, brace yourself in the doorway of a building.

After an earthquake, check yourself and other members of the family. In addition, check for fire, chemical spills and act on them right away. In case of doubt about leaks or damage, switch off all electric main fuse and turn off gas tanks.

If you must evacuate, take your small bag with you and leave message with a contact person as to where you are headed. Do not go sightseeing.

Be prepared for aftershocks. Do not enter damaged buildings because aftershocks can finish them off.

It is said, and you should heed this, that natural calamities like earthquake happen when you have forgotten about them.