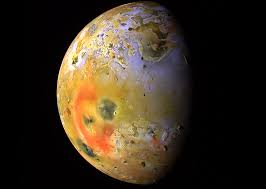 SAN FRANCISCO — Researchers have taken advantage of a rare orbital alignment between two of Jupiter’s moons, namely Io and Europa, and obtained an exceptionally detailed map of the largest lava lake on Io.

On March 8, 2015, Europa passed in front of Io, the most volcanically active body in the solar system, gradually blocking out light from the volcanic moon. Because Europa’s surface is coated in water ice, it reflects very little sunlight at infrared wavelengths, allowing researchers to accurately isolate the heat emanating from volcanoes on Io’s surface.

The infrared data showed that the surface temperature of Io’s massive molten lake steadily increased from one end to the other, suggesting that the lava had overturned in two waves that each swept from west to east at about a kilometer, or 3,300 feet, per day.

Overturning lava is a popular explanation for the periodic brightening and dimming of the hot spot, called Loki Patera after the Norse god.

The most active volcanic site on Io, Loki Patera is about 200 kilometers, or 127 miles, across. The hot region of the patera, a bowl-shaped volcanic crater, has a surface area of 21,500 square kilometers.

Astronomers first noticed Io’s changing brightness in the 1970s, but only when the Voyager 1 and 2 spacecraft of the U.S. National Aeronautics and Space Administration (NASA) flew by in 1979 did it become clear that this was because of volcanic eruptions on the surface.

Despite highly detailed images from NASA’s Galileo mission in the late 1990s and early 2000s, astronomers continue to debate whether the brightenings at Loki Patera, which occur every 400 to 600 days, are due to overturning lava in a massive lava lake, or periodic eruptions that spread lava flows over a large area.

“If Loki Patera is a sea of lava, it encompasses an area more than a million times that of a typical lava lake on Earth,” said Katherine de Kleer, a University of California, Berkeley, graduate student and the lead author of a study published in the journal Nature. “In this scenario, portions of cool crust sink, exposing the incandescent magma underneath and causing a brightening in the infrared.”

The images leading to the new findings were obtained by the twin 8.4-meter, or 27.6-foot, mirrors of the Large Binocular Telescope Observatory in the mountains of southeast Arizona, a state in the southwestern United States, linked together as an interferometer using advanced adaptive optics to remove atmospheric blurring. The facility is operated by an international consortium headquartered at the University of Arizona in Tucson.

“This is the first useful map of the entire patera,” co-author Ashley Davies, of the Jet Propulsion Laboratory in Pasadena, Southern California, was quoted as saying in a UC Berkeley news release.

“It shows not one but two resurfacing waves sweeping around the patera. This is much more complex than what was previously thought.”

“This is a step forward in trying to understand volcanism on Io, which we have been observing for more than 15 years, and in particular the volcanic activity at Loki Patera,” noted Imke de Pater, a UC Berkeley professor of astronomy. (Xinhua)