Soldier called his father, “pa, Pray for me” before he was hit 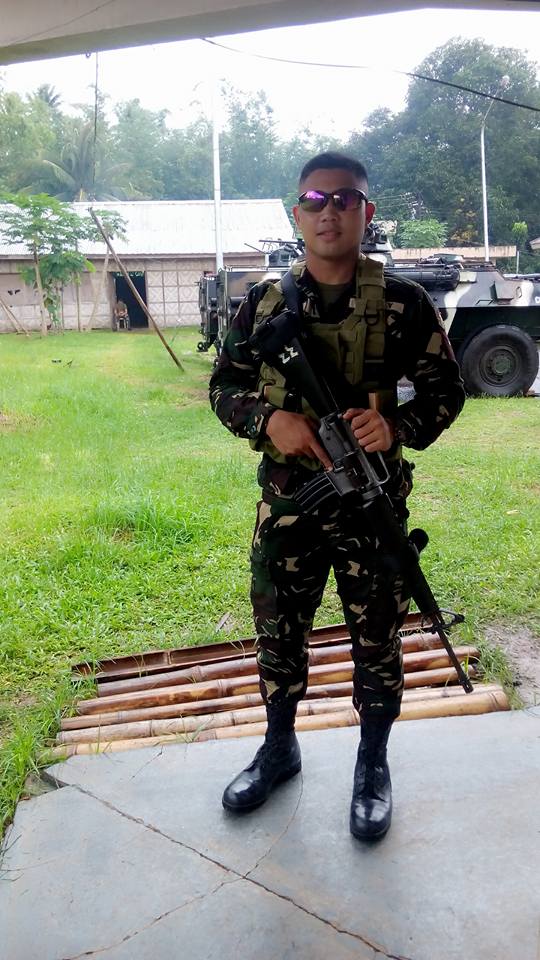 Davao City, Philippines—A young soldier called his father to pray for him while fighting against Maute terrorist in Marawi last May 25.

Army corporal Angelo Estores Jr, 25, father of two young kids, a member of Armed Forces of the Philippines (AFP) 5th mechanized battalion was killed May 25 while trying to get the caliber of his dead companion.

Estores name is listed no. 10 in the list of AFP casualties in Marawi.

(Pa, you Pray for me, my wedding might not push through, only three of us left here, nine of my companions are dead).

During the conversation, Estores Sr. advised his son “jun, kung na trap ka ayaw ug gawas kung walay reinforcement (Jun, if you are trapped, don’t get out until reinforcement arrives).”

Estores even told his father “ginakamang na naku ang 50-caliber pang, RPG ang ginatira sa amoa pang, wala na koy bala, patay na akong opisal, I-Pray ko ninyo (I am crawling towards the 50-caliber, they are firing us with RPG, I don’t have ammunition, my officer is dead, you pray for me).”

While his father was directing his son what to do, Estores Jr. did not answer the phone but his father heard the volume of fire, he just assumed his son was wounded.

At 3pm,the father kept calling his son but the phone kept ringing no one answered, Almeres narrated.

At 6pm classmates of Estores Jr. sent messages to his father “junjun” was hit,

On May 26, the father received a message the military command center his “junjun”, Cpl. Angelo Estores Jr. is dead.

Last May 23, when the Estores family held a reunion, Almeres said Estores jr. called up to apologize he cannot attend because he was en route to Marawi because the city was attacked by Maute terrorists.

Estores was set to exchange “I do’s” to the mother of his two young kids on June 29 in Pikit, North Cotabato.

But the Marawi siege ended his life.

Residents of Pikit consider Estores a hero, for offering his life to defend the people of Marawi.

Estores friends started to condole to his family on his faceboook wall since May 26 as news among soldiers broke off:

* “Rest in Peace to our kababayan, a Pikiteño ,a victim of extremism and terrorism in Marawi. He fought for peace,he fought for us,he fought for the country! He died a Hero! RIP soldier Angelo Estore.”

The Military in a report said 14 soldiers, two police officers and 18 civilians have been killed as of Saurday night, May 27.-Editha Z. Caduaya/Newsline.ph

EDITOR’S NOTE: (THE PICTURE earlier uploaded in this site was taken from the facebook profile photo of Cpl. Angelo Estores Jr. He actually used the picture of his close friend who is also a soldier. The picture has been changed. our SINCEREST Apology).