ALAB: A book of love, sacrifice and the undying support for Duterte 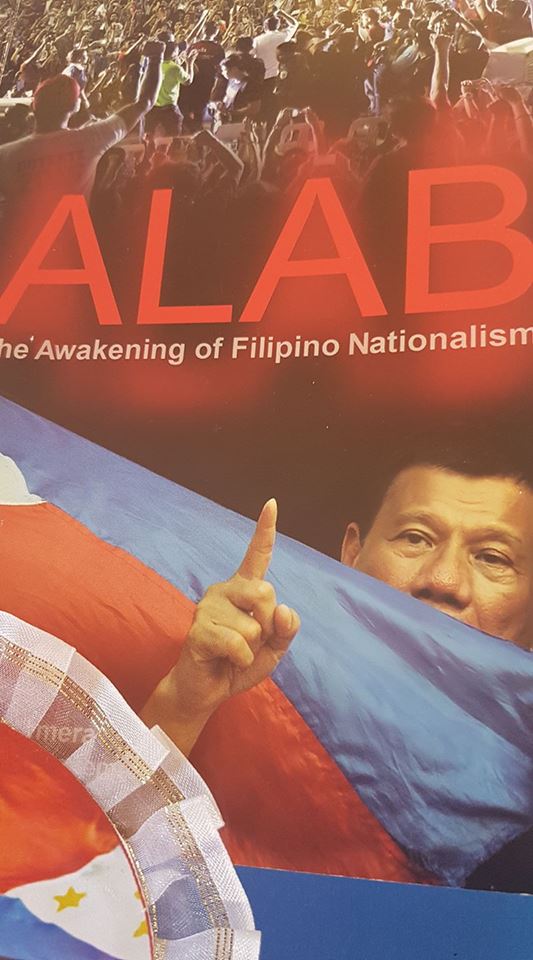 DAVAO CITY, Philippines—The night glitters, one would think it was a gala night as everyone was sporting a stylish Filipiniana or Barong tagalog, unless you notice the backdrop welcoming everyone to the book launching “ALAB: The Awakening of the Filipino Patriotism.”

The huge function room was filled with people whom our government calls the  Bagong Bayani (New Hero’s) the description fitting our Overseas Filipino Workers (OFWs), they are the hero’s because when the Asian economy blinked in the mid-80’s it was the OFW remittances which kept the Philippine economy going and same is true until today.

Most of the attendees were land-based workers coming from Middle East, Europe and Asia .

ALAB, is a Filipino term for “Fire” connotes  the burning desire of the OFW’s for change and the love of country which the   administration of President Rodrigo Duterte, has shown,  the leader whom the vast majority of the OFW’s call Tatay or Ama (Father).

Looking at the physical attributes of the OFW attendees, one can say they were  pictures of accomplished, contented and happy workers, but  not until you hear their stories.

Alab, the book, depicts  the pain, struggle and the quest of the OFW’s to be economically empowered back home.

Aboveall, the book tells the story how the OFW supports Duterte’s political journey and how they benefited his administration.

Their stories, do not just  touch your lives it shows the longing of the OFW’s for a peaceful country as it portrays how they love their country with a deep sense of pride under the Duterte administration.

Here are some stories written in the book.

Florentin Desesto Jr. who used to work in Iraq until his retirement in 2016 shared how he campaigned for Duterte while having coffee with Filipinos in their workplace. How to introduce Duterte to every Filipino he met  when everyone knows Mar Roxas, Grace Poe, Jojemar Binay, Miriam Defensor.

Desesto stated  “Whether I was in  Sulaymania, Erbil Kirkun in the northern sector, in the central part of baghdad and Basrah, or down at the southern sector, I always spoke to Filipinos all the positive things I knew about Tatay Digong to all the Filipinos that I would meet in Iraq. It did not matter if they were just a handful or a large group. Of course, it was not easy to speak with my fellow Filipinos while I was on a bulletproof vest and had my escorts around. It was good thing that Iraqis in the souther were warm and friendly so we were often greeted with a smile.”

Azenith Tonio, a Filipino now residing in Spain narrated she never knew what and who Duterte was until she went to a forum attended by Actor Robin Padilla in Barcelona  who shared to them the great things that Duterte has done to Davao City as the mayor.

Tonio stressed “Campaigning when your not in your own country is no joke. Everything that we need needed to be controlled  and scrutinized to avoid breaking the laws here in Spain. There came a point that we were fighting with friends and relatives because they had other choices for president. There were those on social media who treated us as though we were paid operatives and did not even have an iota of respect for our choice for president. Why? We are still Filipinos right? and we still had the constitutional right to choose who we believe should be the right person for presidency–DUTERTE!”

Arnel Corpuz, a recipient of the Bagong Bayani Award in 2014 for community and social services. He previously worked in Queensland Australia. Corpuz personally met Duterte in 2015.

Corpuz and his wife Ching volunteered and devoted their time to campaign for Duterte instead of enjoying the family bonding during  his bi-annual vacation. The couple has to move from  his hometown in General Santos City to the neighboring towns and provinces as he took pride of Duterte’s peaceful city–“because my daughter is studying in Davao and we feel she is safe there.”

Althea Ori, 57, an OFW in Hongkong said “Many presidents have passed and I didn’t mind what the situation was. But when Mayor did not yet decide to run as president, I kept on Praying for him to have a change of mind. I thanked God that He answered my Prayer when he (Duterte) finally decided to run.”

Ori said she searched for a group to connect with in Hongkong until she found one, “I fully support the campaign of Mayor Duterte to the point that when I saw his face I know in my heart that there is something good about to happen to the Philippines when he wins. And he does, I no longer  have to be afraid for the future of my grandchildren, a reason why I am and I will support him up to my last breath. God Bless the Philippines.”

The OFW’s  connected and  mobilized to help one another  with the help of their leaders Leo Lauron, Gerlyn Acedo,Merilou Maume Escudero  and other officers from various continents of the world.

But their campaign did not stop after Duterte gets elected-the undying support is not yet done. They decided to  formally organize the OFW Global Movement for Empowerment (OFWGME).

The book  published by the California-based T’boli Publishing and Distribution Inc. entitled, “Alab: The awakening of Filipino nationalism”.

The book tells the story heroism and how the OFW’s worldwide  unified  and sacrificed for a common goal–Victory for Tatay Digong!.-Editha Z. Caduaya/Newsline.ph