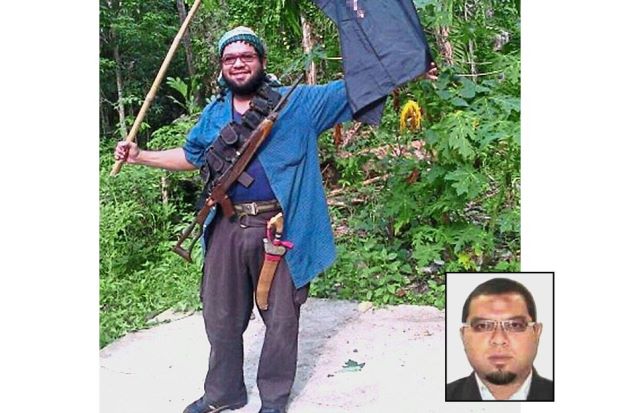 PETALING JAYA, Malaysia —- Government soldiers killed one of the top Malaysian terrorist during the aerial bombing Thursday, September 28, which took place at the vicinity of the  Bato Mosque in Marawi City.

The Bato Mosque used to serve as the command center of the Islamic State  (IS-inspired) Maute  terrorists.

A report published in Malaysia The Star online revealed that  Militant  Muham­mad Joraimee Awang Raimee, 42, was killed by Philippine government  soldiers in Marawi.

Joraimee served as councilor in  Selayang Municipal before he became the most trusted lieutenant of Universiti Malaya professor-turned-militant Dr Mahmud Ahmad while hiding in the jungle with the Abu Sayyaf terror group in Basilan.

He is  reportedly the third Malaysian known to have been killed in the Marawi city siege entering its fourth month.

The two other Malaysian terrorists killed were identified by  Malaysian intelligence sources last May are  Abdurah­man Asmawi from Kelantan and Dr. Kamsa Yahya from Kedah.

The death of two Joraimee could mean that the government soldiers are nearing the location of Isnilon Hapilon, the self confessed Emir of the South-East Asia caliphate and the Maute leaders.

The Staro nline stated “Intelligence sources in the Philippines and Malaysia said that Joraimee, also known as Abu Nur, was confirmed to be among the dead at the mosque.”

The Star online reported  Joraimee and other top  terrorists officials were at the  vicinity of the  Bato Mosque  when Philippine troops moved in.

Malaysian Police Inspector-General Tan Sri Mohamad Fuzi Harun, confirmed to the Star that Joraimee was indeed killed in Marawi  “Yes, this is what I have received so far. Am unable to give more details at this moment.”

Malaysia authorities believed Joraimee and Dr Mahmud were among the key planners of the May 23 Marawi attack with Abu Sayyaf leader Isnilon Hapilon and the Maute brothers – Abdullah and Omarkhayam – for the creation of a caliphate in South-East Asia.

Dr.  Mahmud was considered the bagman who reportedly financed Marawi attack, reportedly received RM500,000 or about P62-million  from IS militants and sympathizers.

Galvez, however, did not revealed the names of the foreign terrorists.

Though the Scene of the Crime operatives collected  took DNA from the recovered cadavers, still authorities face a challenge in identifying them as they could not find a dental record to be used in the DNA testing.