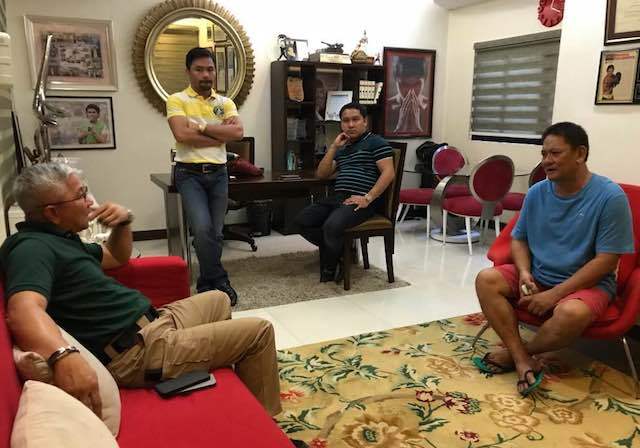 Equipped with three search warrants, Aquino led a joint team of the PDEA, Philippine National Police Special Action Force, and the Philippine Army, conducted the raid at about 3:00 in the morning Friday, October 6 but Lopez and his wife were out of the house.

But at about 1:00 in the afternoon of the same day, Lopez surrendered to Senator Manny Paquiao.

The raiding team found two  firearms, explosives, flasks and vials believed to have been used to manufacture  drugs.

The evidences  found inside Lopez house clearly shows he is a druglord, says Aquino.

Lopez name is not included in the drug list of President Rodrigo Duterte according to Aquino but he said :his name is included as drug user.”

Aquino said the “green brook”  contains list of drug personalities and narcopoliticians and each name had a corresponding amount.

He theorized  “It only proves that he is into big-time [drug] pushing. He is a drug lord.”

Aquino said there were also local chief executives and non-political personalities in the list, but declined to name them, for now. Local officials of Sarangani described Lopez as a low profile politician,  his wife is a service and infrastructure contractor.

Lopez won unopposed during the May 2016 elections. He served as Maasin Mayor from from 2004 to 2013. -Editha Z.Caduaya/Newsline.ph