Posted on October 27, 2017 by NewsLine Philippines 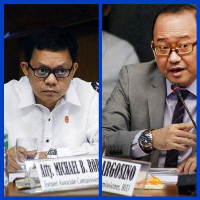 MANILA, Philippines — Ombudsman Conchita Carpio Morales has ordered the filing of charges for Plunder against Bureau of Immigration (BI) Commissioners Al Argosino and Michael Robles, together with Wenceslao Sombero, Jr., president of the Asian Gaming Service Providers Association, Inc. (AGSPA), after they were found to have extorted P50 million in exchange for the release of 1,316 arrested Chinese nationals who were violating Philippine immigration laws.

This, after the Investigations conducted by the Office of the Ombudsman established that Argosino and Robles received P50M from Chinese businessman Jack Lam in a deal facilitated by Sombero.

The Ombudsman found that on November 27, 2016, “Argosino and Robles, in connivance with Sombero, accumulated or acquired ill-gotten wealth in the amount of P50M, through a combination or series of overt or criminal acts committed on a single day.”

In a Consolidated Resolution, the Ombudsman further said that “while the amount returned by Argosino to the Department of Justice lacks One Thousand Pesos (P1,000.00), it cannot excuse them from being indicted for Plunder” since they failed to controvert, by clear and convincing evidence, the claims of Norman Ng and Alex Yu (Lam’s business associates) that money, amounting to P50M, changed hands at the City of Dreams in the City of Manila. This is aside from Robles’ admission that “they took possession of all five bags containing the P50M.”

The Ombudsman gave no credence to Argosino and Robles’ claim that they merely took custody of the money for safekeeping and as evidence in an ongoing investigation on illegal online gambling, noting that “their failure to immediately report to the proper investigating authority, or at the very least, their superiors, (DOJ) Sec. (Vitaliano) Aguirre and Commissioner (Jaime) Morente, that they had custody of the P50M, contradicts their professed intentions.”

She adds that their acts of (1) giving P2M to Sombero; (2) keeping the remaining money with them from 27 November 2016 to 8 December 2016, instead of turning over the same to the proper authorities for safekeeping; and (3) negotiating with, agreeing to give and actually delivering P18M to Calima on 9 December 2018 as his share in the P50M, are all acts of ownership, which showed that they treated the P50M that they received as their own.

The Ombudsman resolution stated  that Argosino and Robles used their official functions as deputy commissioners of the BI in the commission of the said crimes while Sombero acted as a conspirator and middle man.

Carpio Morales added that Sombero’s indispensable role and representation as president of AGSPA paved the way for the consummation of the transaction. On the other hand, Calima’s criminal liability stems from his participation in the extortion plot as he received P18M from Argosino and Robles to, among other things, keep his silence.-Editha Z. Caduaya/Newsline.ph