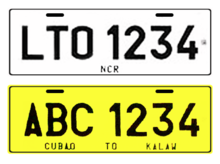 DAVAO CITY, Philippines — The Land Transportation Office can now release the over 700,000 licensed plates after the Supreme Court announced Tuesday, January 23, 2018, the lifting of the Temporary Restraining Order (TRO) which prevented the issuance of the plates.

Suprere Court Spokesperson Theodore Te in a press conference said the magistrates in an en banc session dismissed the petition filed by Rep. Jonathan dela Cruz of Abakada party-list and Parañaque 2nd District Rep. Gustavo Tambunting, which questioned the legality of the Bureau of Custom’s move to to donate the plates to LTO.

The petitioners raised a legal issue involving the donation saying the BOC cannot donate to the LTO the confiscated license platesbecause the Commissionon Audit issued a notice of disallowance on the LTO Motor Vehicle License Plate Standardization Program (LTO-MVLPSP).

But after thorough deliberations, Te said the high court declared the use of appropriation legal and Constitutional.

Te emphasized “The Court ruled that the 2014 GAA (General Appropriations Act) included an appropriation for the program and the use of the appropriation is constitutional.”

The Department of Transportation and Communications (DOTC) had awarded the project to the joint venture of Netherlands-based J. Knieiriem BV Goes and local company Power Plates Development Concept, with the contract signed on Feb. 21, 2014.

The Bureau of Customs (BOC) confiscated 300,000 license plates for motor vehicles and 400,000 plates for motorcycles in 2016 after the manufacturer failed to pay taxes. Instead of disposing of these, the BOC donated the plates to the LTO to address the latter’s backlog in issuing plates to motorists.

“The appropriation, both for procurement and implementation, has been examined and decided by the Court and may not be assailed anew under the present petition based on the same grounds,” Te said.

The modernized license plates include new safety features such as tamper-resistant locks and bolts as well as reflectorized sheeting.

thousands of motor vehicle and motorcyle owners were no issued licensed plates due to the pending case.

With the Supreme Court decision, the LTO can now issue the modernized licensed plates.-Harold V. Pontognan/Newsline.ph