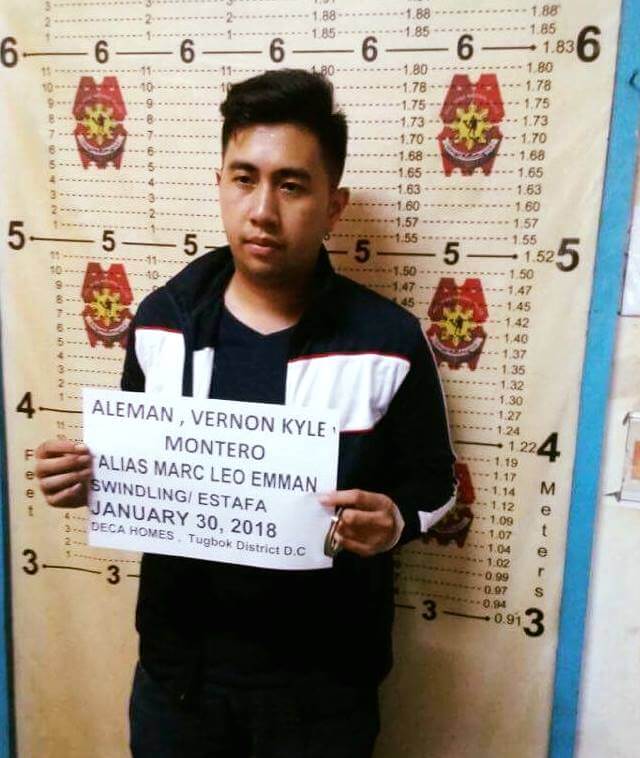 Aleman was caught in the act of receiving P200,000 cash from Michael Johnson, a retired member of the US Marines, Tuesday afternoon, January 30, 2018.

The entrapment operation was conducted after Mrs. Rhea Johnson filed a complaint against Aleman for collecting money when he never had a transaction at Toyota Matina branch.

Johnson, reported to the police that Aleman, who presented himself as employee  and car agent of Toyota Matina branch, repeatedly went to their house and collected P95,000 from January 16, 25 to 28, 2018, saying the money was for reservation, shuttle fee and for advance deposit of their car.

The couple made a follow up at the car center on January 29, but they found out that Aleman is no longer connected with Toyota since December 23, 2017.

But on January  30, at around 7:30 in the morning, the couple received a text message and a call from Aleman, asking them to prepare  P200,000 representing the 15 percent down payment because he will collect the cash at around 11:30 same day.

This prompted the couple to report the incident to the police.

At around 12:05 in the afternoon, while the police was taking note of Johnson’s complaint, Aleman sent a message informing them that he was in their house.

This prompted the police to conduct an entrapment operation which led to Aleman’s arrest.

Found in Aleman’s possession were two smart phones, and the envelop containing the P200,000 cash.

Police authorities suspect that Aleman is part of a big group operating all over Mindanao victimizing car buyers.

The authorities are also investigating reports that some bank managers are in cahoots with Aleman’s  group are reportedly receiving share in the illegal operations.

The Tugbok  police will file swindling and estafa charges against Aleman.

The Toyota Davao has repeatedly warned car buyers to transact and make payments only at their office.-Editha Z. Caduaya/Newsline.ph